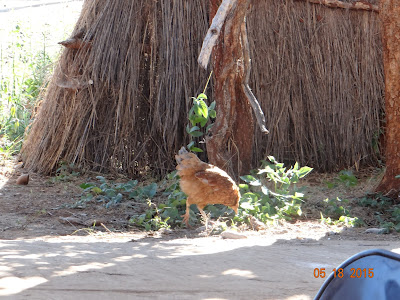 These are our chicken friends who hung out around the garage during our stay at New Day. We had to continually chase them out of the work area...and prevent them from drinking the plaster water. 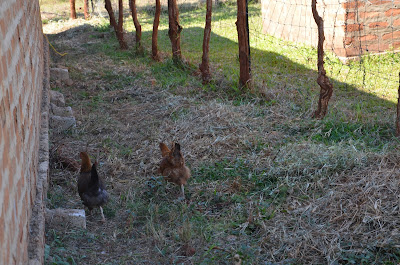 John's Monday started with a group of five people who drove up in a vehicle and had traveled over an hour to bring one man to see John. The man was completely blind, and they thought that John could make him see again. John was able to fit him with a prosthetic eye that he had pre-made for the left side...the other side could not be fit. It took multiple times explaining to the people that the man would not be able to see at all, not even some, with the prosthetic eye. This was very difficult for John that they misunderstood. 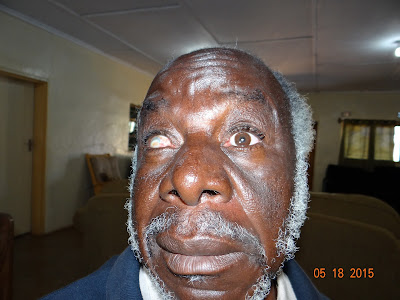 The man after fitting of the left prosthetic eye.

John also had two people from the Macha area come back for fitting of custom eyes that he had completed. 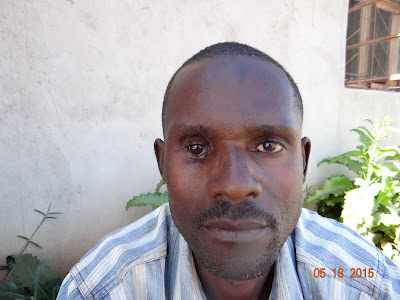 One of the men from Macha. 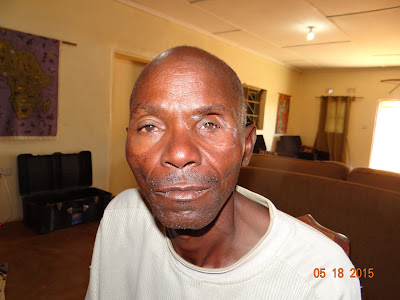 John does such amazing work! 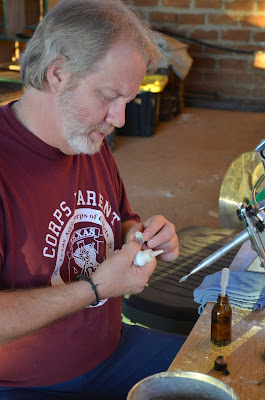 Some adjusting to an eye for optimal fitting. 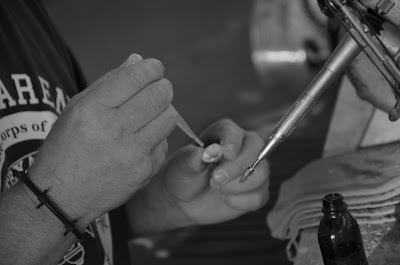 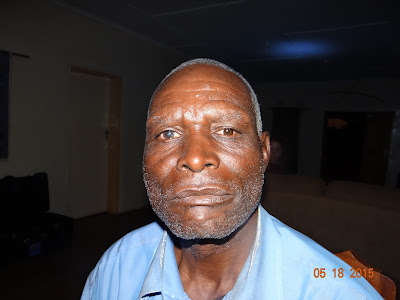 Blu had to go into Choma Monday afternoon and encountered another man who needed a prosthetic eye. So, Blu brought him back to New Day to see John, and he was able to fit the man with a pre-made eye.

The day for Chris and I started with more fabrication...trying to get all those laminations completed. We got 4 more laminations done on Monday, so...9 down and 8 to go. 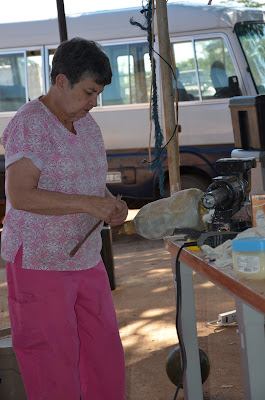 Chris working away on a prostheses. She is such an awesome prosthetist and has taught me so much! I can't thank her enough for her guidance. 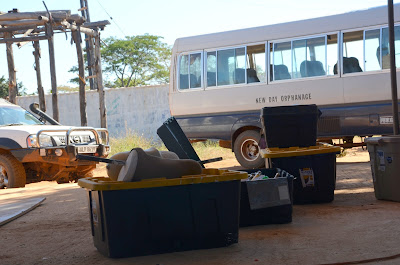 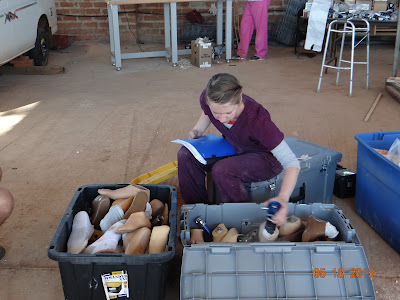 Between getting models ready for Chris to laminate, I started going through feet to pick out a foot for each person. The notebook had our notes for measurements for what size everyone needed. 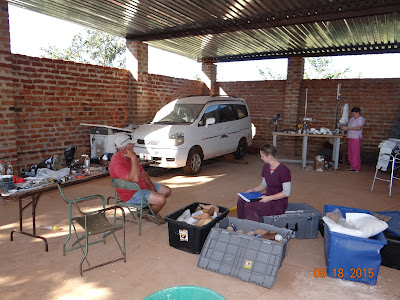 Wes came by to visit and watch the fabrication.

During the morning, Melvin came for repairs. The socket fit well, but he just wasn't putting the prosthesis on correctly. Last year when Melvin came for fitting of his prosthesis, he had been drinking beer. (Read the story from last year's blog here...scroll down in the post). So needless to say, he didn't exactly understand all the instructions on how to put the prosthesis on or use it. We thankfully had time with a sober Melvin this year to explain everything again. Bryan acted as our translator when we saw Melvin. The prosthetic knee was locking up, so we switched it to a new knee that was donated by Otto Bock. The foot was in good condition. Melvin was wearing the same set of clothes and same shoes as he was last year. The shoes were completely worn out and his sock on his sound right foot was just in tatters. I ran down to the guesthouse and got a pair of John's socks to fit on him, and we had a pair of tennis shoes that fit him also. I was so glad to see Melvin this year. I had such mixed emotions last year about seeing him since he had been drinking when he came for fitting. Did he understand enough to be able to actually use the prosthesis?...Did he really understand why we came to Zambia?...Did he care? We had another opportunity to talk with him this year, and I was glad for that. 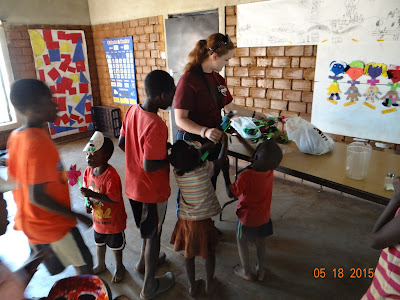 Erin brought several different crafts to do with the kids. She did pinwheels and decorating masks on Monday. The kids LOVED playing with Erin! 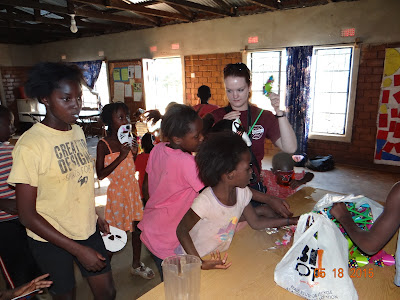 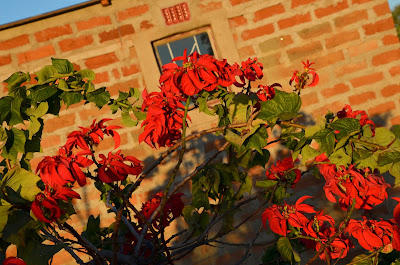 I stopped to take some pictures of this gorgeous bush in Carolyn and Diana's backyard, which is right by the garage. 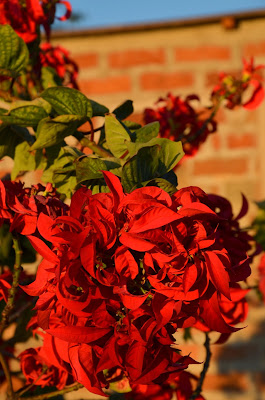 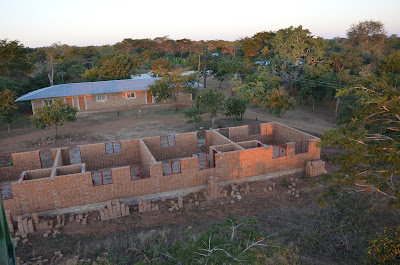 I also took some time before dinner to climb the water tower. Here's a view of the new school building addition they're working on right now. Behind it is the current school building. 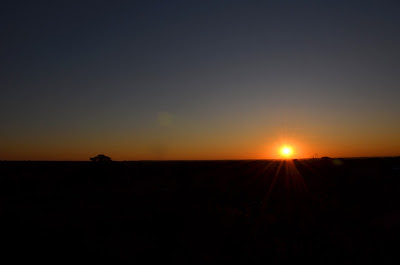 During dinner, the lights went out again. I had planned on starting on sewing after dinner, since John had moved the sewing machine and supplies to The Ark...but that didn't work without power. John had some eyes on the stove when the power went out, and thankfully Wes and Laurie have a gas stove so he took the eyes over the their house to finish cooking. While John was gone doing that, Bryan got a phone call from "the lady with the baby" who was a patient of John's. John had made her a custom eye but couldn't find where her phone number was written down. He had been trying to figure this out most of the day and how he would let her know to come back for fitting if he couldn't find the number. It ended up that Bryan had given the lady his phone number, so it all worked out.