Sunday, May 24: Trip to Luyando's village 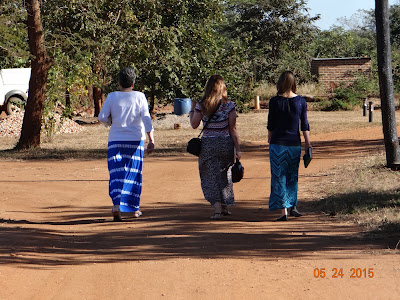 Chris, Erin and me walking to church. 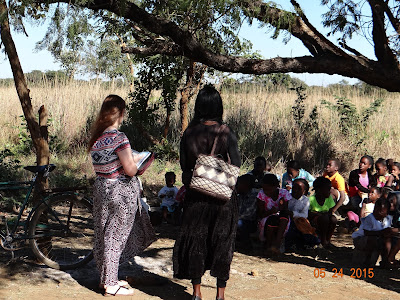 Erin teaching the children's Sunday School lesson and Abby translating. There are so many kids! 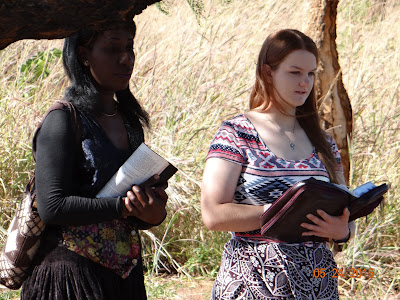 Erin has such a gift in working with children. She did an awesome job with the lesson. 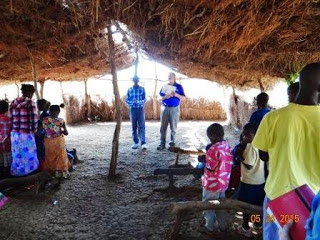 John preaching on the three Ananias' in Acts. 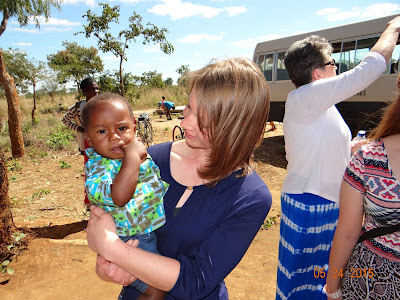 After church, I got to hold Justin (the baby Jason and I sponsor at New Day), and he amazingly didn't cry this time. :) 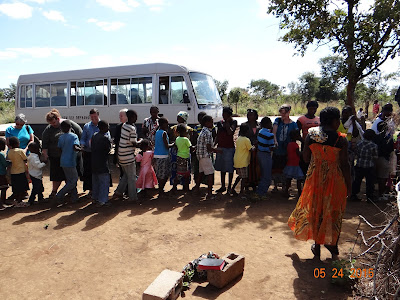 Everyone forms a line as they leave church and you walk along to shake each person's hand.

Blu had been able to talk with Luyando's mother on the phone a few times during our time at New Day. (Luyando was the young girl we fit last year with an above knee prosthesis who had lost her leg in Fall 2013 to a snake bite.) Her mother let Blu know that Luyando's father had left them and getting transportation was proving to be an issue to get her to New Day for a check-up and repairs on her leg. So on Sunday afternoon, we went to her village to see her. And it was a long trip out in the bush...we estimated it was about a 40 km (~25 mile) drive from New Day to her village. Blu, Chris, John and I left New Day just after lunch with a bag of supplies we anticipated needing to repair her prosthesis. 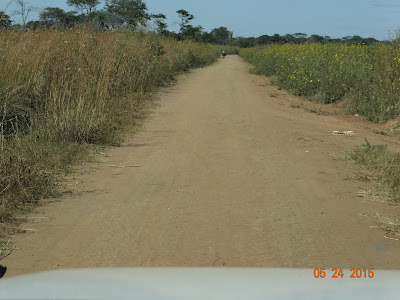 So we started on a dirt road at a fairly quick pace. 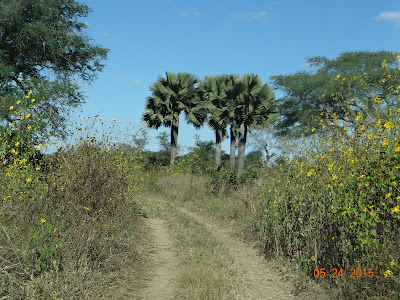 And eventually turned off to a more narrow road that required a slower pace. 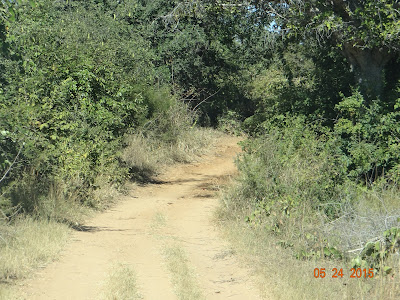 With lots of potholes that required slowing down more. 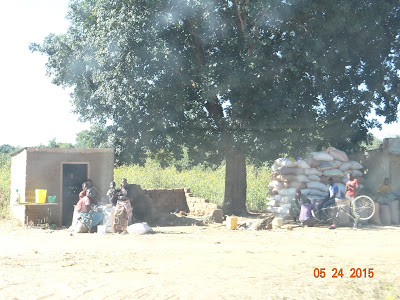 And stopped to ask for directions multiple times. And crossed a river at this rocky and bumpy crossing. 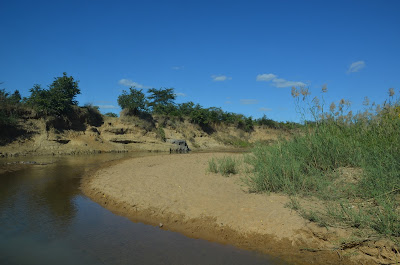 View of the river. 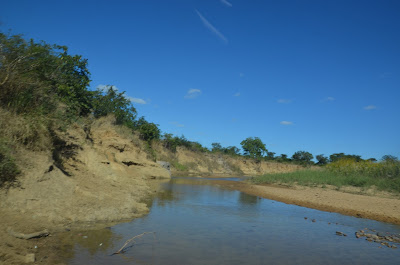 The rainy season is over, so the river is down quite a bit. 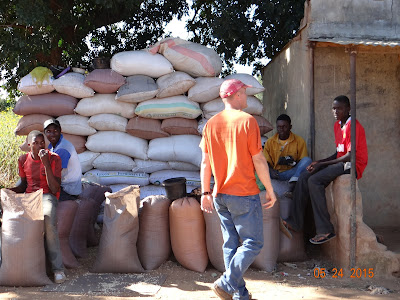 And stopped to ask more directions. 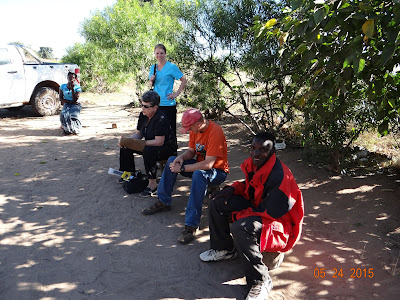 We finally made it to Luyando's village. The guy in the red jacket is her uncle. We happened to stop to ask directions where he was at, and he rode in the back of the truck the rest of the way to show us where to turn. 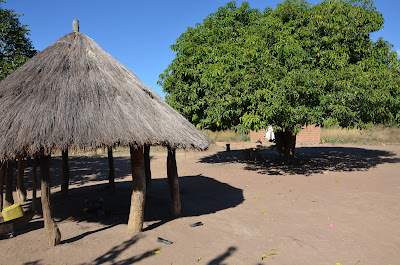 This is the area where Luyando lives with her mother and three siblings. 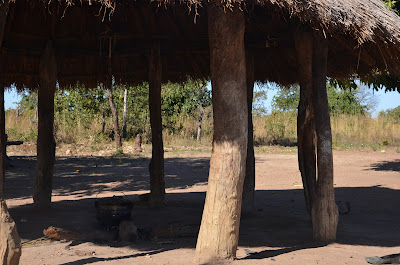 Thatched cover where the campfire and cooking is done. 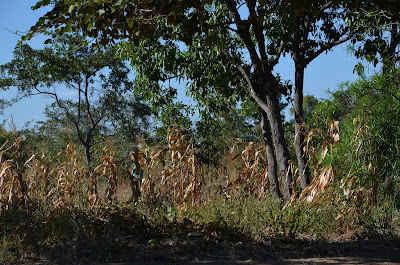 The brown, dried plants are maize. There was a bad harvest this year, which will make the dry season difficult without the maize to eat and sell. 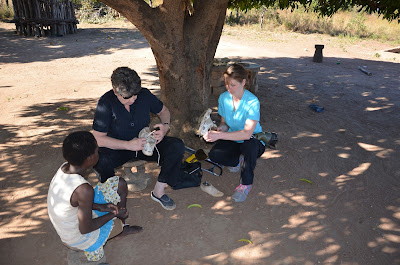 We set up under a tree to look at the prosthesis and made repairs. She hasn't been wearing it for a few months, because the lock got stuck and the leg was too short since she has grown. 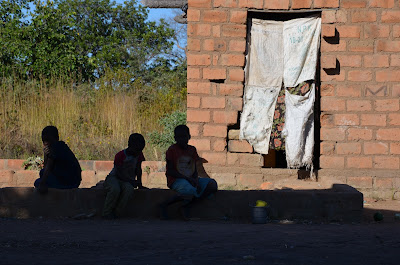 The brick building with cloth door covering is their shelter. These are Luyando's three brothers sitting and watching us. 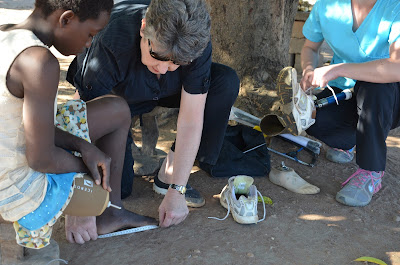 Chris measuring to see what size new foot Luyando needed. She got one of the brand new Otto Bock feet. We figured out we didn't have all the tools we needed to fix the lock, so we would need to take the prosthesis back to New Day to our work area. 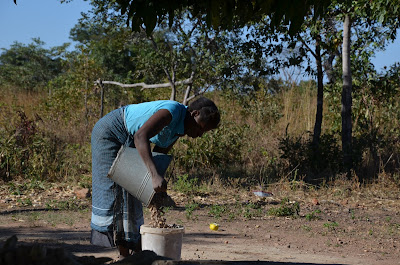 This is Luyando's mother. She was putting ground nuts (peanuts) in a bucket to give to us as a 'thank you'. Blu was able to tell her that we appreciated the gesture but there is no need for the gift. 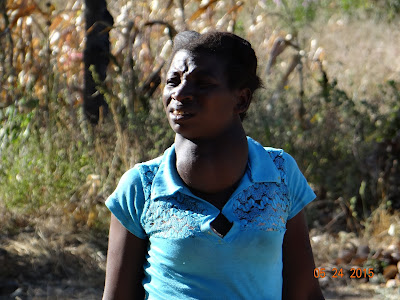 Luyando's mother has a goiter, which she has not had medical treatment for. Please pray for this woman and her 4 children. 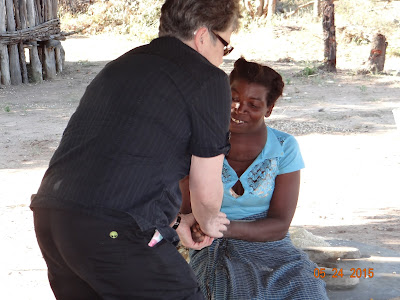 We were so moved by Luyando's family's situation. The harvest was bad, and they obviously don't have a lot of food. The father had left them months before. It's just heartbreaking. When Chris went to tell Luyando's mother goodbye, she gave her some money. It was quite a substantial amount of kwacha that will hopefully help them until harvest again.

Since we didn't have the tools we needed, we had to take Luyando and her uncle back with us to New Day to finish repairing the prosthesis. 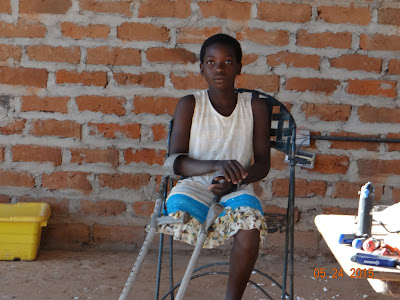 Luyando sitting patiently waiting on us to do the prosthetic repairs. She is 13-years-old, so we will need to see her every year for either a new leg or repairs since she is growing. 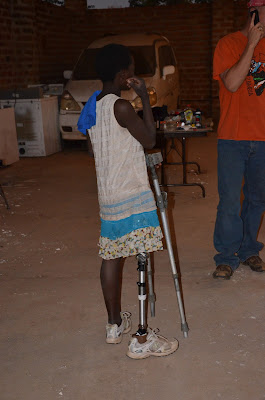 After all the repairs were finished, it was already after dark. We had given Luyando and her uncle some food and a Coke while they waited. Blu went to eat dinner while we worked on the prosthesis, so he could take her and her uncle back to their village after we finished with the prosthesis repairs.

After we had dinner back at The Ark, John and Erin went down to say goodbye to all the New Day kids. John, Erin, Cindy and Sarah would be leaving Monday morning with Debbie and Ricky at 6am for Livingstone. Since John had finished seeing all of his patients, there was time for them to go see Victoria Falls and on a safari in Botswana while Chris and I finished the last prosthetic fittings on Monday. 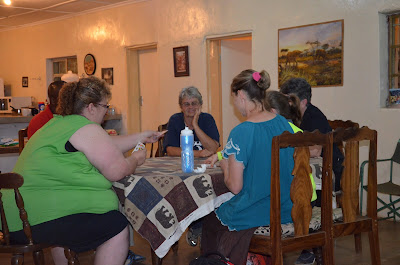 Diana, Debbie, Carolyn, Cindy and Sarah came over to play cards with Bryan and Chris. I rested and journaled about the day.