Looking at Plan B for supplies

I talked with Chris yesterday...she started the conversation with "Don't panic when I tell you this, but...", and I found out that all of our supplies that are on the shipping container are sitting at port in the U.S.....they haven't left yet....we have 59 days till we leave for Zambia!

Hurray for 59 days till Zambia! A bit of an issue that our supplies haven't left the U.S. yet. We're thinking they will likely not make it in time, so we're starting on our Plan B.

Plan B: ship internationally the resin (chemical that we need for laminating the prosthetic sockets) since that cannot go on the plane. We can compare shipping supplies vs doing extra baggage fees for our flights. This is not ideal, obviously, since it incurs more cost, but we need to have supplies there for sure.

So, we're back to gathering supplies for our trip. I had taken several donations that had come in to Chris when we had our PPIHN board meeting including a few feet, liners and socks. Another interesting thing is that a rep from Otto Bock was at my office earlier this week and offered some donations of knees or feet for our mission work. I gave him a call to let him know our shipping container situation, so he's going to see about getting us some components. Yay! Chris will have to purchase more supplies also. 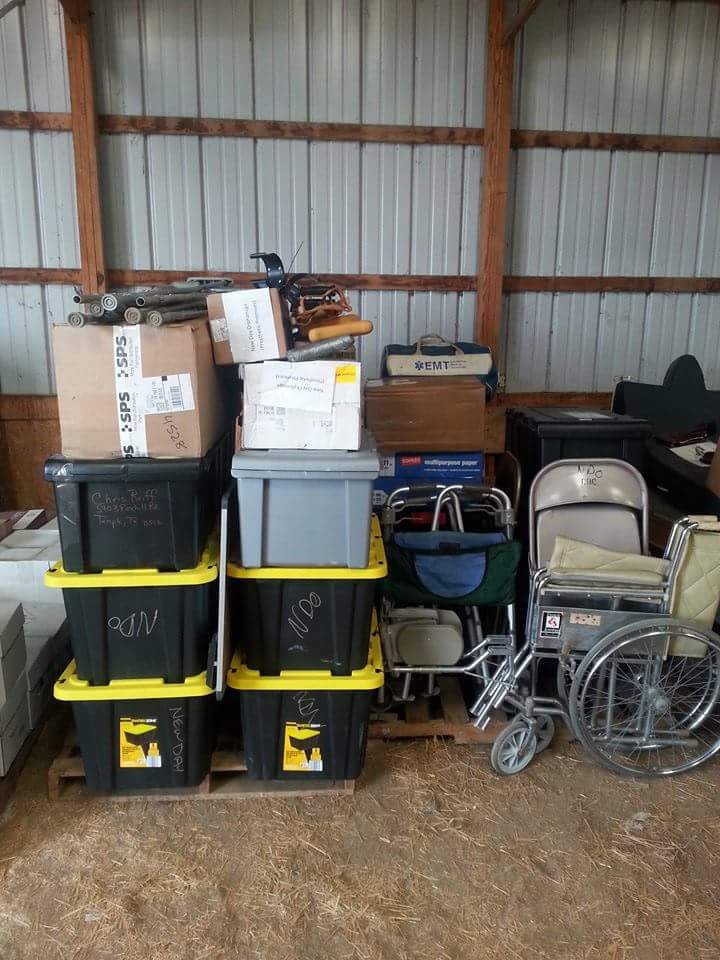 Here's the big load of supplies that are on the container. Oh container, we pray you make it to Zambia in time.

So I did find one small thing amusing, though we're a bit distraught that the container hasn't even left the U.S....last year, our crate had arrived on time with supplies and we had our extra bags on the flight with more supplies. (You can see in the picture above the plastic totes like we had last year as extra baggage on the plane). One of those totes was stolen in transport to the orphanage (read story here...scroll to the bottom of the post). On that tote was our pipe vises, which are equipment that fit into a vise for our prosthetic plaster model to fit in for modifying. So, we had bought two more pipe vises and put in the supplies on the shipping container this year. And now, it looks like we won't have pipe vises again to work with. Perhaps one day, we'll have pipe vises to use in Zambia.

*Asking for prayers that the shipping container does make it to Zambia in time for our trip. Also, that preparations for our Plan B to make sure we do have the necessary supplies go smoothly. 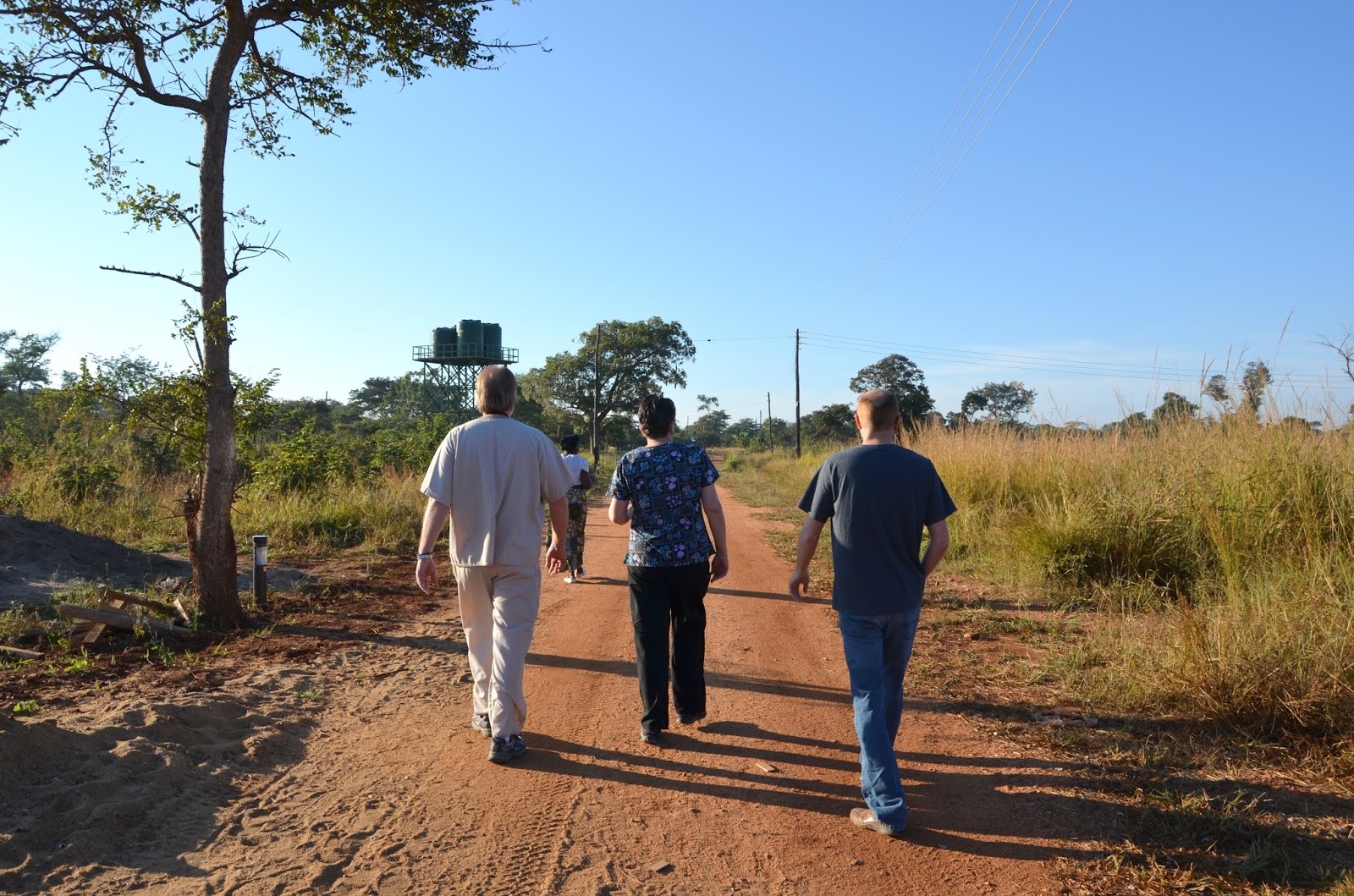 Friday was my first Prosthetic Promises board meeting in Temple, and I'm so happy to be a part of this group. We discussed where PPIHN is now, our upcoming trip and plans for the future...and had a wonderful time with food and fellowship.

It is truly amazing to see where God has led Prosthetic Promises in such a short time. Chris and John made their first trip to Zambia in September 2012. After returning, they began the process of forming a non-profit for future trips to Zambia and hopefully other countries as well. In this short time, we have made another trip in 2014 and will be leaving in just 70 days for a third trip! We also have plans drawn for a clinic to be built and the funds in place to start construction. Praise God for His wonderful blessings! 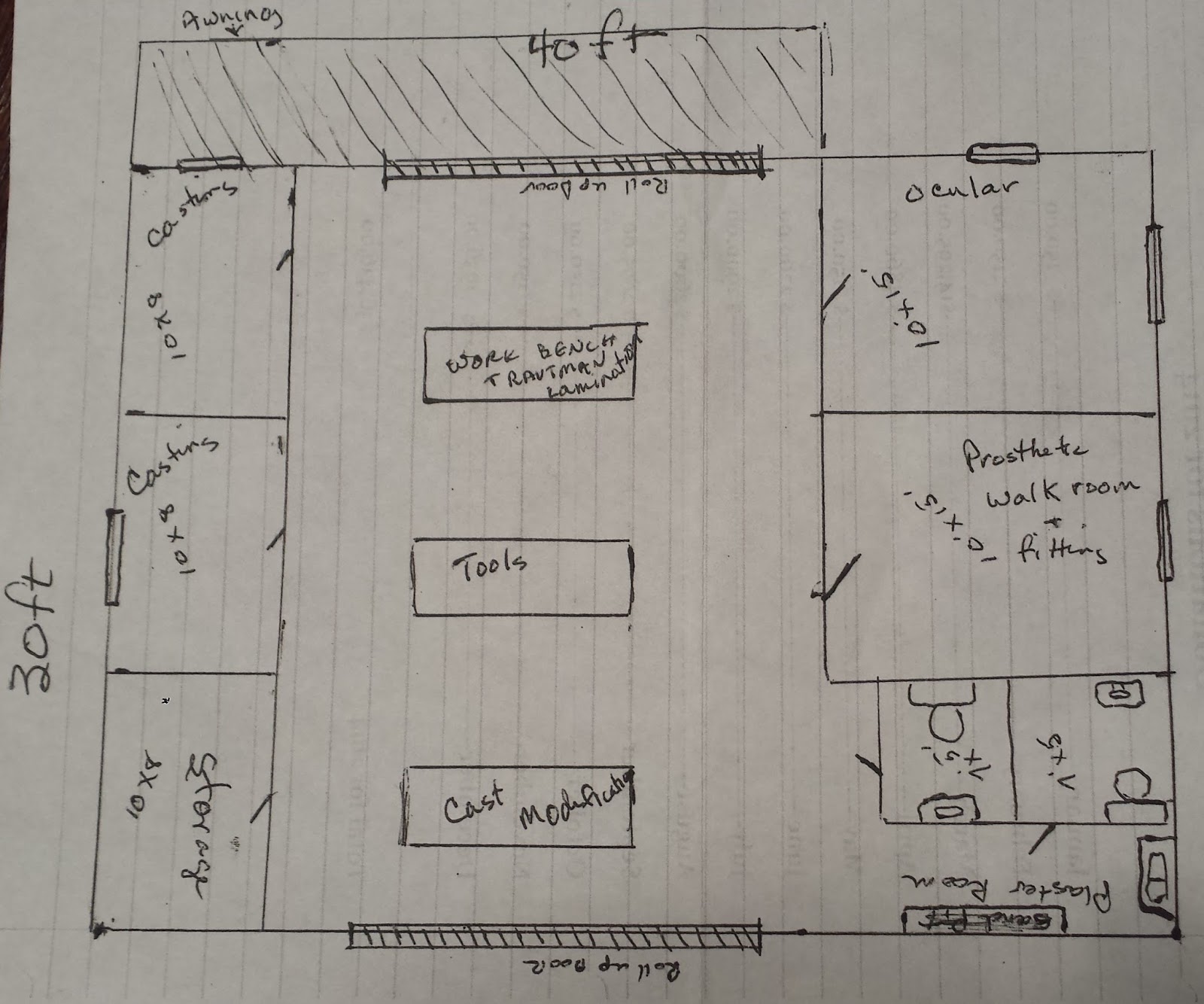 The drawing of our (hopefully) future clinic.

At the beginning of our meeting on Friday, Dee (Darbi's mom) shared a story that Darbi (from New Day) had sent her. They encountered one of our prosthetic patients walking on crutches to New Day because her prosthetic foot had broken. She carried the prosthesis as far as she could but had to leave it at some point and continue walking with the crutches towards the orphanage in hopes that when she got there, they would drive back to get the prosthesis to repair. They did get the prosthesis, and Blu replaced the foot. The replacement foot, though, did not hold up. Apparently, storing all of our prosthetic supplies in the attic of the guest house has some issues. We'll have to assess what is still good when we get there in May. (Another good thing about a future clinic with a storage room...better temperature control.) More than the thought of what happened to our supplies, was this huge rush of emotion I had for the lady with the broken prosthesis. John prayed before our meal right after Dee shared that story, and I just had tears well up because this lady...all the people we made prostheses for...got the prosthesis, but I'm not there to fix it when it breaks. A prosthesis is a built, complex device...they're going to break sooner or later. I just want to be there to fix it. My hopes are to be able to teach someone in the future to do repairs throughout the year when we aren't there. In the mean time, I'm counting down the days until I am there.
Posted by Katie Brinkley No comments: