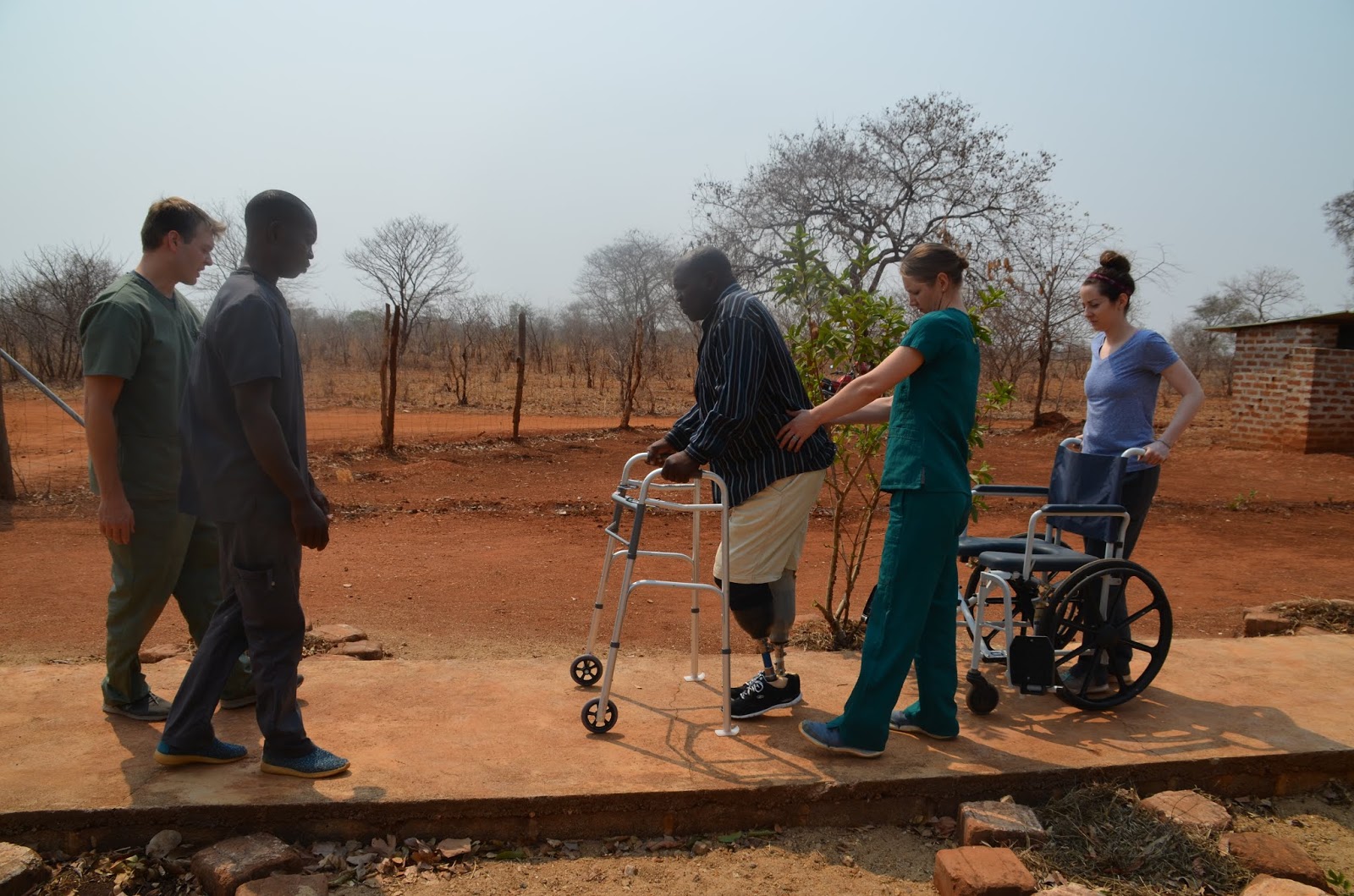 Wednesday started with a class field trip from Nurse Carol's kindergarten class at the clinic before patients arrived. 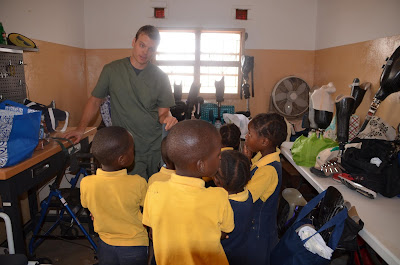 Andy giving the class a tour of John's room where we had all the finished prostheses with each patient's supplies stacked around the room. 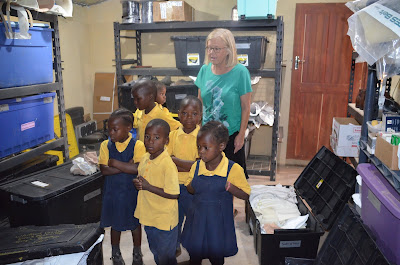 They also went in the storage room to see all the supplies.

Wednesday were patients from the Macha area plus Daniel, who Traci had told to come back on Wednesday. We had 4 patients for fittings---Trywell, Moomba, Daniel and Ozia, and Killion's brother came by to pick up his new prosthesis. (We don't usually let someone just pick up a prosthesis without us doing a fitting, but Killion is a truck driver and was not able to come back for fitting. He will go by the clinic and have Protashow do a check up next time he's in the area. Definitely an unusual situation, but he did need a new prosthesis and we're only there for a few weeks....so we did what we had to in a pinch.) 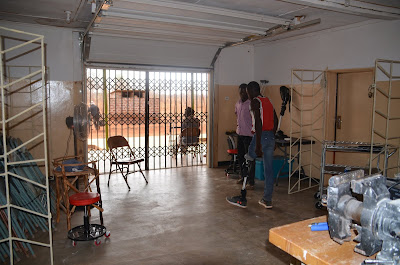 Trywell walking with his new prosthesis. He needed a new socket since he has grown, and new knee and foot since his old ones were broken. 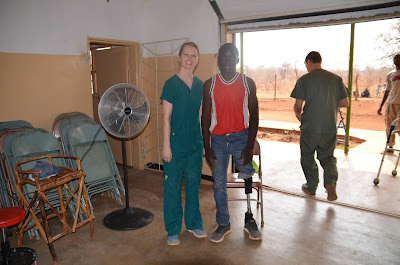 He's as tall as me now! And likely will be taller than me next time we see him. We've been seeing him since 2014, though last time we saw him was April 2018. It's crazy how much he's grown up since then. 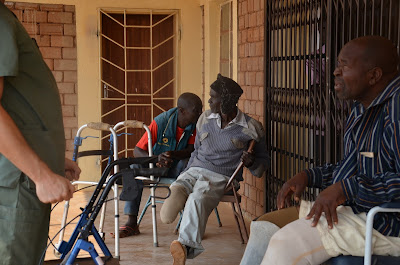 Daniel came for fitting of a new right prosthesis. His left prosthesis that was fit in April 2019 was fitting well. 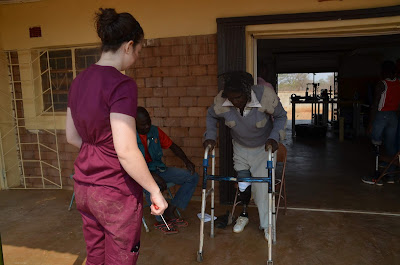 Daniel is doing well with his walker and both prostheses. He was fit with a right prosthesis only in September 2018 while the left side was still healing. Then fit with a left prosthesis in April 2019. So, he needed a new socket on the right side this time. He's had time to get used to walking with bilateral prostheses, so it was nice that he was at the clinic at the same time as Moomba, who was getting his second prosthesis for the first time on Wednesday. 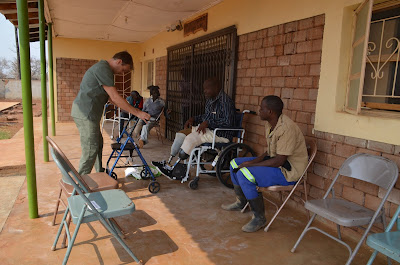 Andy assessing a walker for Moomba to use. 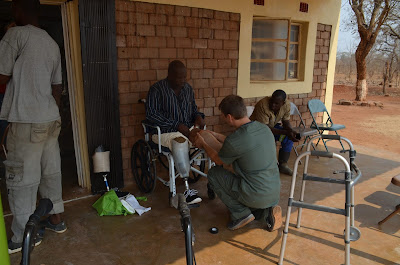 We found Moomba a standard walker to use instead of a rolling walker (right side of the picture). Here Andy is working on fitting him with his left prosthesis. We had fit Moomba with his right prosthesis in April, and he had his left amputation since then. 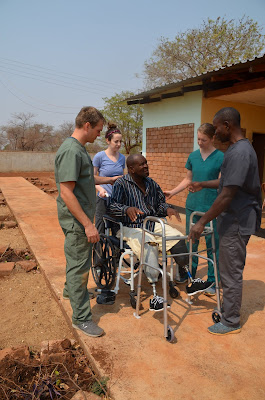 Everyone on hand for helping Moomba stand with both prostheses for the first time. 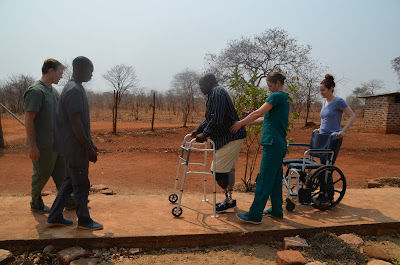 He did remarkably well for having bilateral prostheses. He will likely need to continue using a walker to get around, but having prostheses and being able to do some walking will be tremendous help for him at home. 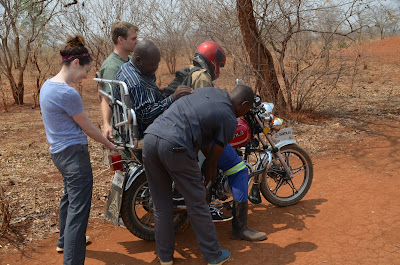 He came on the back of a motorbike (yes, holding onto the driver without legs to stabilize him on the bike). We initially tried to help him get the prostheses on the foot rests, but he was having difficulty. 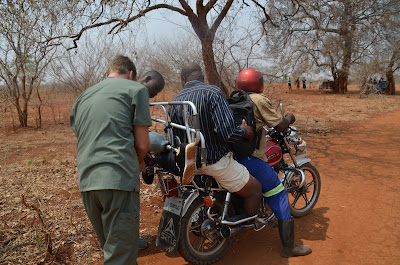 So, he requested we just strap the prostheses on the back of the bike with the walker, and he could ride home like he came. Definitely the most interesting completion of a prosthetic fitting! We actually had to do this for Daniel when he first got his prosthesis, but now Daniel has gotten used to using the prostheses while on the motorbike. 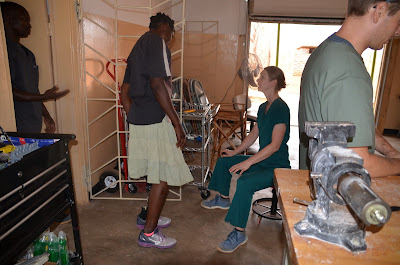 Ozia also came for prosthetic fitting. She got a whole new prosthesis with a really great foot that was donated by Freedom Innovations (manufacturer of prosthetic components). 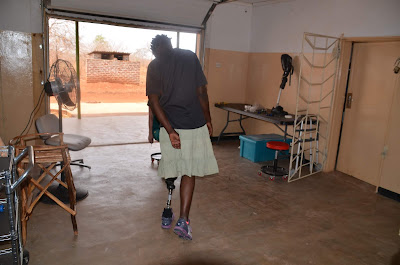 Here she's examining the prosthesis since she could really tell a difference in how the foot functions compared to her old prosthesis. 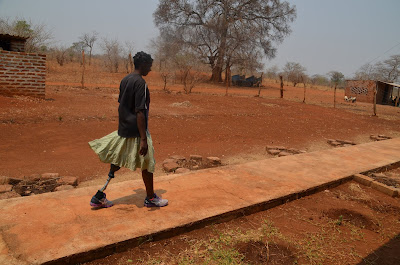 Ozia is a greater walker with her prosthesis, so just had to check alignment and fit without need for any training. 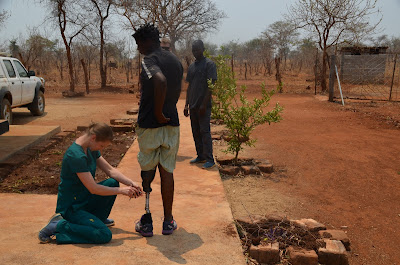 Few small alignment changes for her prosthesis, and she was good to go! I'm anxious to see how the new prosthetic foot holds up for her. She does A LOT of walking on the rugged terrain.

In addition to our prosthetic fittings, Amanda had two patients come to the clinic for physical therapy only. Fostina and Carol had brought up a picnic lunch for us, so we all lunched together at the clinic before closing up for the afternoon. We had only a few patients on Wednesday, so it didn't take all day. We rested in the afternoon some, got to watch dancing practice for the wedding party for Melvin's wedding that's coming up (he's a teacher at New Day), and Andy and Graham played with the kids. After dinner, we went to Praise and Worship with the New Day kids....the older kids take turns leading. There's prayer, praises and concerns, and singing.

We knew Thursday was going to be a crazy busy day with the rest of the patient fittings (20 people total).