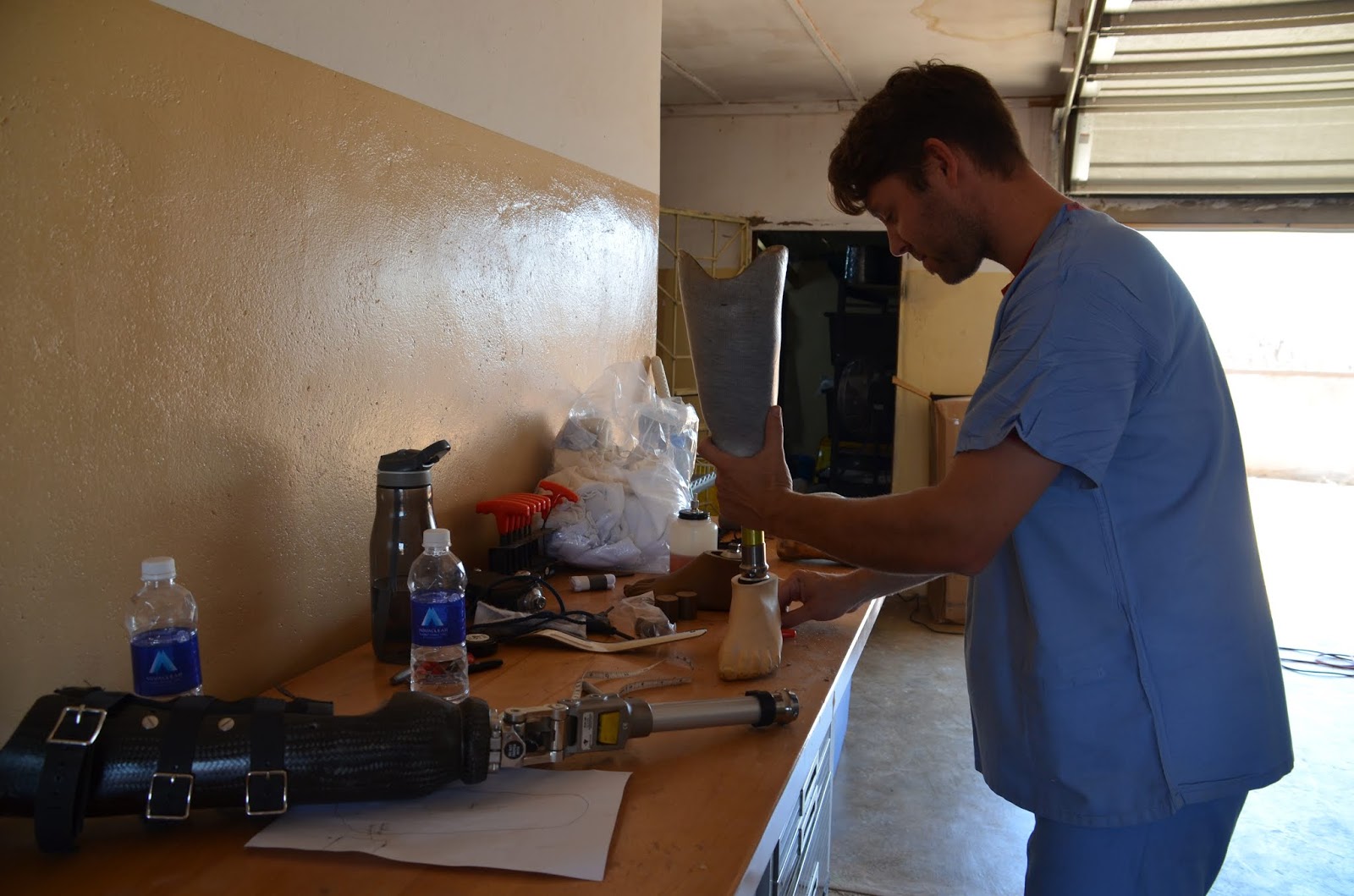 On Wednesday, we again split up with Andy and I traveling with Protashow to Choma to screen patients at the Disabilities Office and Traci, Graham and Amanda staying at the clinic to get started on fabrication with the casts taken the day before, more setting up the clinic and being available for any patients who arrived directly to the clinic. We have a great working relationship with the Disabilities Office in Choma to screen patients at their office, and they communicate with patients needing prosthetic services to let them know about our trips. 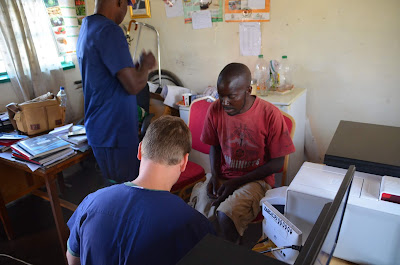 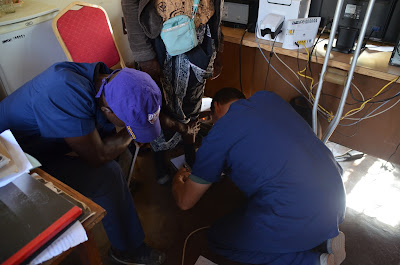 We had brought a bag with us of a few prosthetic supplies and tools in case we could take care of someone at the Disabilities Office rather than them coming back to the clinic since we have limited space on the bus for people. Here Andy is taking tracings of Beauty's feet for shoes that will have a lift on one side. She has one leg shorter than the other and needs a shoe lift. With the measurements and tracings, we were able to make the shoe lift and send back to the Disabilities Office without her needing to come all the way to the clinic. 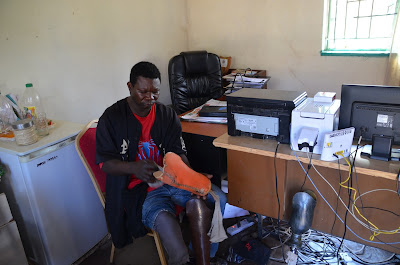 Justin was one of the patients who only needed supplies, and we were able to take care of with the supplies we brought with us. 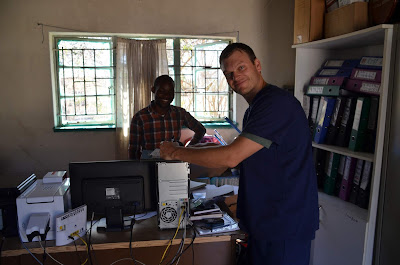 Wrapping up before heading back on the bus to the clinic. 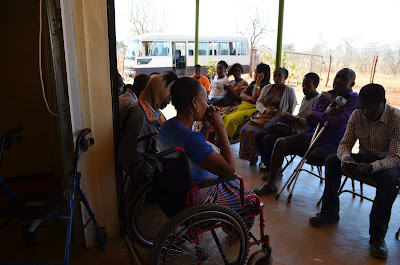 The bus was packed and the clinic porch quite full of people once we got back. 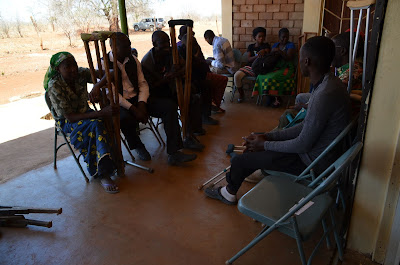 I'm always amazed at how patient everyone is waiting on the porch to be seen.

When we got back to the clinic with the bus it was just about noon. Graham had been trying to get the generator up and going since we would need it all afternoon for electricity at the clinic with a scheduled electricity outage (load shedding due to the drought) from noon to 6pm. But, the generator just wasn't working. We witnessed a miracle on Wednesday...the electricity went out at noon and came back on about 10-15 minutes later to stay on the rest of the day! 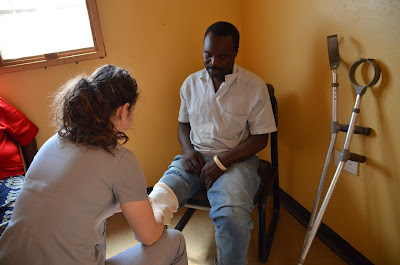 Traci casting Alan for a below knee prosthesis. He was in a car accident early this year which resulted in an amputation. We saw him in April when he wasn't ready for fitting yet, so we had fit him with shrinkers (tight compressive socks for his residual limb to help decrease swelling and shape his leg in preparation for prosthetic fitting). 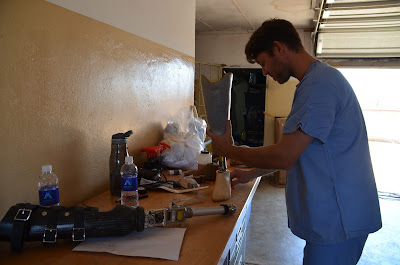 We had several prostheses needing repair that Graham was taking care of while Traci, Andy and I were casting people for new prostheses. Protashow was spending a little time with each of us learning from everyone and assisting in castings. 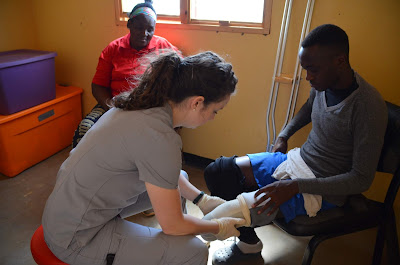 Traci casting Christopher for a new below knee prosthesis. He current prosthesis had broken. 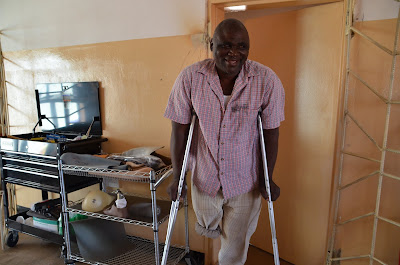 Lawrence, who we've seen in the past, was casted for a new prosthesis this trip. Andy fit Malawo with a passive arm prosthesis that we made in the U.S. and brought with us. A huge thank you to my bosses for the ok to fabricate this at the office I work at, Alliance Orthotics and Prosthetics, and thank you to our technician, Shawn, who did the fabrication. 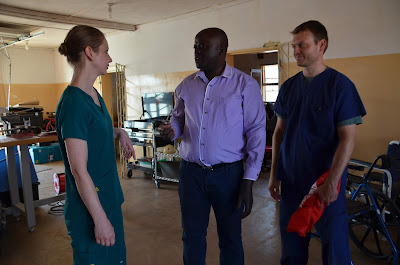 Once the cosmetic glove was put on the arm prosthesis, Malawo was really pleased with the result. And I think everyone waiting on the clinic porch was in awe of the cosmetic arm! 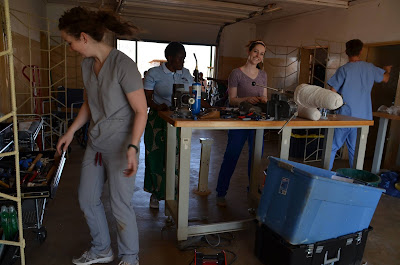 A great "in action" shot in the clinic. We were all busy with seeing patients. 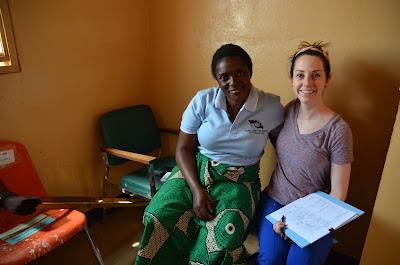 Hildah from the Disabilities Office with Amanda. Hildah helped translate, and Amanda helped me a lot on Wednesday with filling out measurement sheets and assisting in casting patients. 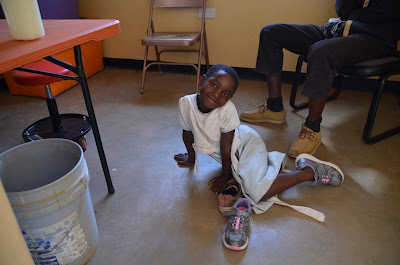 Little Miss Rhoda came for a check up. Her bent knee prosthesis for her right side for clubfoot needed to be repaired and lengthened since she's grown. She was really shy when we first saw her in 2016, but now she's all smiles! 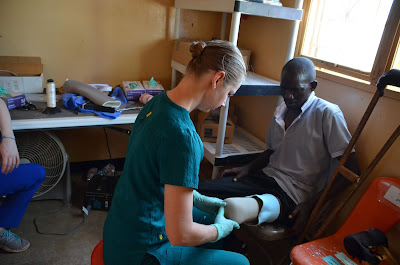 Here I'm finding a liner to fit River before casting him for an above knee prosthesis. River and I got off to a funny start with my misunderstanding of his name. The pronunciation of "L" and "R" is very similar in the Zambian accent, which when you mistake the first letter of his name for a "L" makes for a very odd name. We all got a really great laugh out of that mistake! 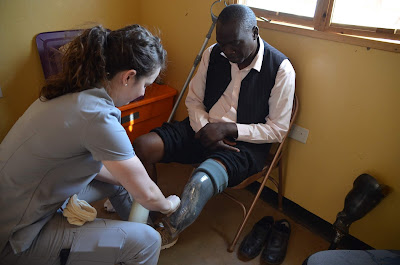 Traci casting Greenford for a new below knee prosthetic socket. We've been seeing him for several years now, and he needed a new socket since his was not fitting well now. 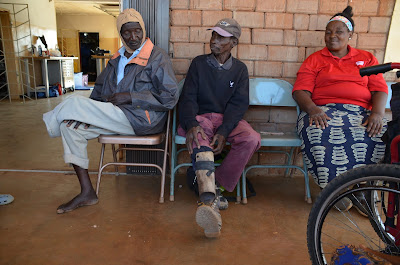 Moses is on the left side of the picture, who was casted for a below knee prosthesis. The man in the center is Njanji, who is wearing a prosthesis that he carved himself out of a tree trunk. And Mama Loveness on the right, who is one of the house mothers from New Day who came up to the clinic to help with translating. 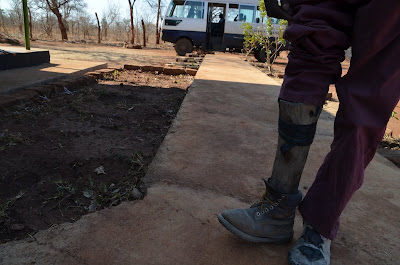 Njanji's amputation was in 1964. He made himself this prosthesis about 3 years ago he said. When asked what prompted him to make his own prosthesis, his response was because his crutches broke. We were amazed at his ingenuity, but so thankful we were able to help him by providing him with a properly fitting prosthesis and protection to his leg. 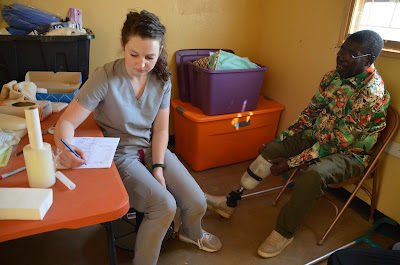 Traci taking notes and measurements for Patress. He's had this prosthesis for several years which has cut out areas that have been causing skin issues. We repaired the prosthesis and provided him with new supplies in April of this year and told him we would make a whole new prosthesis for him in September. So, he was one patient we were planning to see this trip. 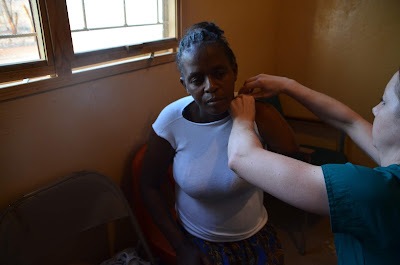 Here I'm getting ready to cast Olina for an above elbow prosthesis. I casted her to bring the cast back to the U.S. for fabrication to take back in April. She was at the clinic the same day that we fit the below elbow prosthesis, so she was excited to see what a prosthetic arm can look like. 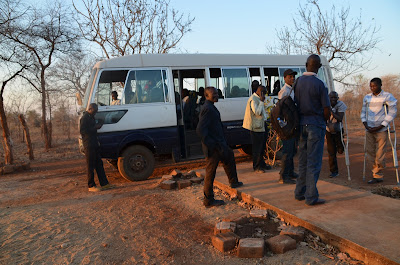 At the end of the day when patients were loading back up on the bus. Protashow drove them back to Choma, and the ones who were casted for new prostheses on Wednesday would come back the following week for fittings.

The bus headed back to Choma about 6pm and we closed up the clinic for the day.

On Wednesday, we saw 33 patients total. (As I'm typing that number I'm amazed that we could see all those people in one day). It was such a wonderful teamwork effort and empowerment from the Holy Spirit! We had so many people in the clinic with 3 of us doing castings, Protashow and Amanda assisting everyone and Graham working on repairs, we didn't actually have a firm number on how many prostheses we had casted for that day. We just knew that Thursday was the start to A LOT of fabrication.