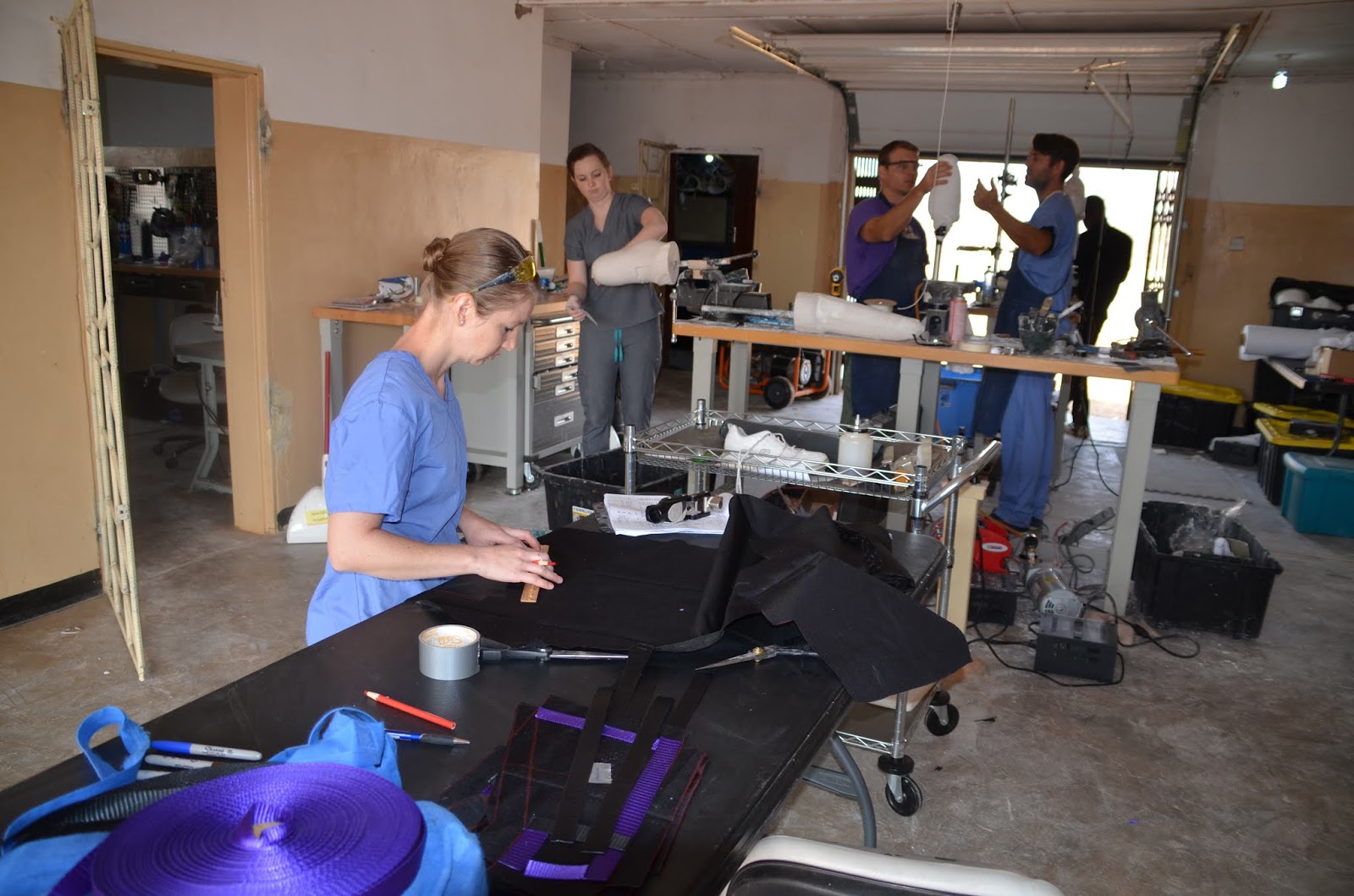 On Saturday, we got to the clinic a little after 7am to start working. 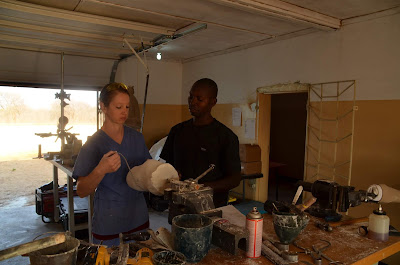 Protashow and I going over plaster modifications for a below knee prosthesis. I'm the first to tell you that I'm not a teacher, but Protashow and I have been working on a good teaching/learning way of doing things. He has lots of study material and books that we've given him and then practical application happens during our trips. 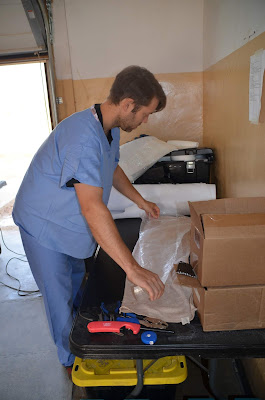 Graham getting a PVA bag ready for a lamination. It was so awesome to have a technician on the team this trip! I learned a lot from him and Andy throughout the trip. It's always cool to work with new people and learn different ways of doing things. 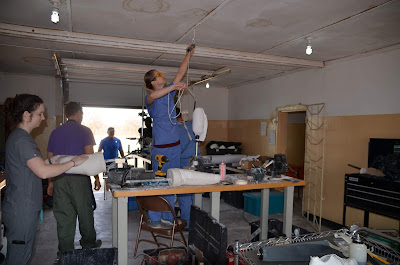 Andy and Graham made a second lamination jig out of a pylon we use for a prosthesis and nozzle from the air compressor. Here I'm using wood screws, washers and cord to make a system to hold the lamination bottle. We got creative and it paid off! Two lamination stations meant double the output since we knew we were pressed for time to get all the laminations done. 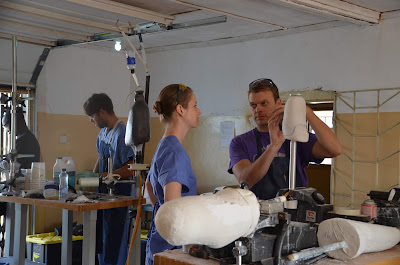 Andy and I talking over design for a below knee prosthesis. We were using some attachment components in a little more unique way to decrease how many laminations we needed to do. (Some attachment components require a double lamination for a prosthetic socket while others are only a single lamination.) During the course of the day, we started questioning whether we'd have enough resin to make all the prostheses. We did some calculating and prioritized which prostheses needed to be made and which patients we may need to put off until next trip if we ran out of resin. And then most importantly, we prayed over the resin that God would make it last to get everything made. 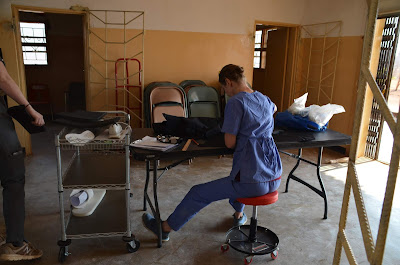 I was determined to get the sewing portion completed on Saturday (which I did not). Here I'm measuring out and cutting the fabric that will be sewn into the "sail" part for prosthetic socket. Many of the above knee prosthetic sockets we make are a CJ socket design, which uses a cloth portion on the back of the thigh (the "sail") to give the patient the ability to adjust the prosthesis themselves for best fit. This is a good option for our patients in Zambia. 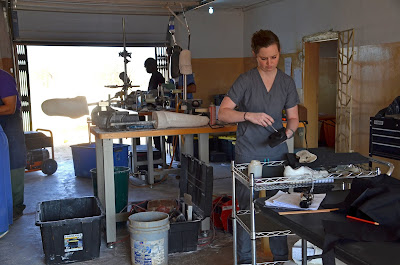 Traci making the shoe lift for Beauty on a pair of shoes we selected using the tracing and measurements that Andy took when we were screening patients in Choma. 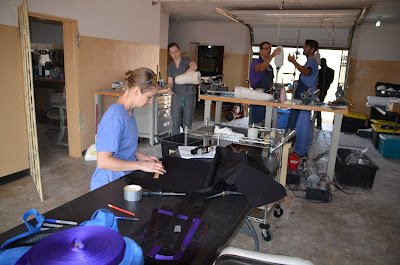 We got almost all of us in one picture working on our tasks. I'm working on cutting out sail fabric, Traci is getting a plaster model ready for lamination, Andy and Graham are working on laminations and Protashow is smoothing a prosthetic socket on the sanding machine. Amanda was in the room with the doorway to the left... 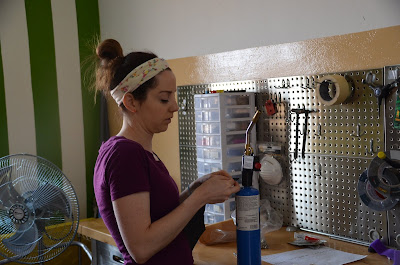 ...making buckles and burning holes for the attachment screws. 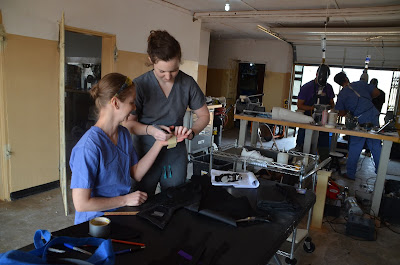 Traci using my hand for sizing as she made a strap with attachment for a spoon for our patient, Friday. He has upper extremity finger amputations, which makes it difficult for him to feed himself. 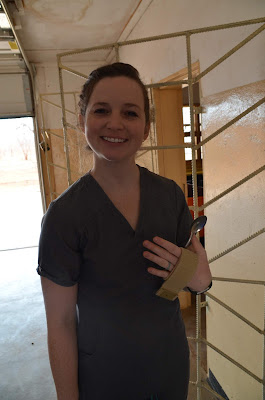 Traci came up with a great design that he can wrap around his hand, use his teeth to secure the strap and the spoon fits in an elastic band. 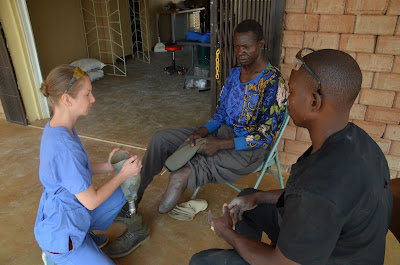 We also had 2 patients at the clinic on Saturday. This is Gilbert, who we made a below knee prosthesis for in September 2018. We made some repairs, gave him new supplies and made sure we have his contact number to have him come in April for us to make him a new socket since his is large now that it's a year old. 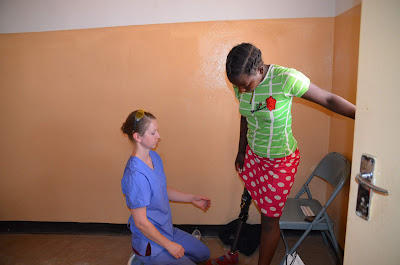 And Luyando came back for fitting of her new above knee prosthesis. When she and her mother came to the clinic on Saturday, we were finishing assembling her prosthesis. What a quick turnaround! We casted her on Friday morning and had it completed and fit by midday on Saturday. 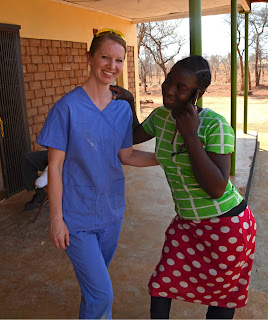 I asked if we could take a photo together, so she was striking a pose. 😁 She's been coming for prosthetic care since 2014, so it's been cool to be able to see her and her mother each trip. She knows more English now, which makes it much easier for us to communicate. (My knowledge of Tonga is still super basic.) 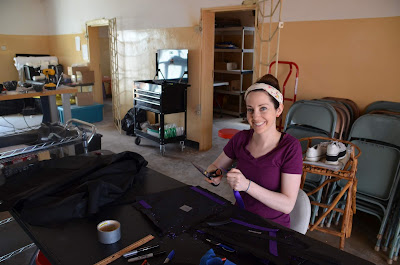 Amanda helping cut out all the pieces for the "sails". She helped me with this last April as well and commented that she was much faster this time. 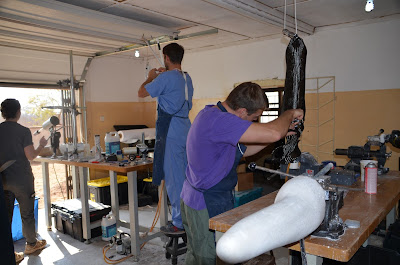 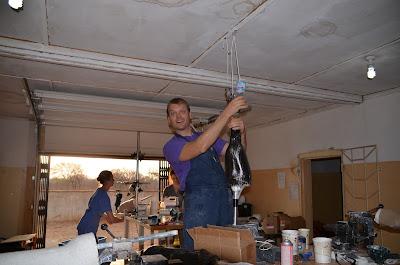 And a goofy pic 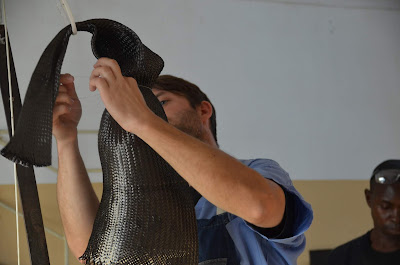 Here's a great close up of the carbon braid material that is used to laminate a prosthetic socket. Carbon is very strong and lightweight when used in a lamination, which makes it a great material for prostheses. 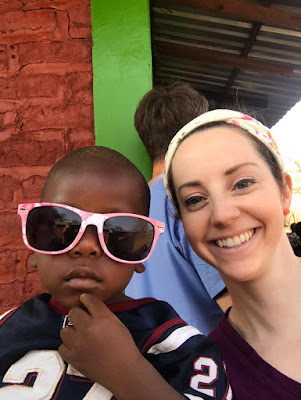 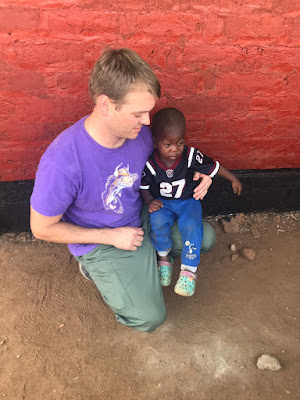 There was a lot going on at the clinic and at New Day on Saturday, so it was great that Andy, Graham and Amanda could spend a little time with the kids at Kid's Club. 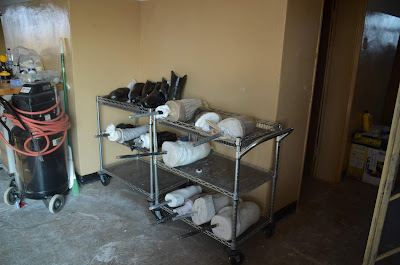 At the end of the day on Saturday, there were 14 laminations left to do. The electricity went off on schedule at 6pm, so we called it a day after that. 7am-6pm...whew! Lots accomplished on Saturday. We had a team meeting of sorts and determined we felt like we were at a good place on fabrication, so we would take off Sunday afternoon after church for rest.

On Sunday morning before church, we found out the load shedding schedule had changed to increase from 6 hours to 8 hours a day off. However, there seemed to be conflicting information different people got on what the actual schedule was. So far in the trip, aside from the miraculous day the electricity only went off for about 10 minutes when it was supposed to be off all afternoon, the load shedding was following the schedule pretty well. During the time at the clinic when we would be laminating, it was pretty important to know if the electricity would be going off.

Church was Sunday morning and then we rested in the afternoon. The electricity was off from 1pm to 7-something pm (so not following the new 8 hrs off it was supposed to). Andy and Graham had brought treats for the New Day kids, so we all walked down to see the kids in the afternoon and hand out goodies. Candy, beads for the girls and toy cars for the small boys. 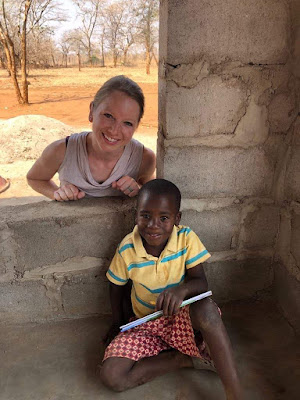 I also brought a book for Justin (who my husband and I sponsor), so got to give that to him. He's still super shy around me and hides behind the other kids most of the time, but Papa Wes made him take a picture with me. :)

We got in lots of visiting with New Day staff on Sunday afternoon, which was so nice! And Teacher Carolyn cooked dinner for us! We were thankful for the Sunday rest and were planning for an early start on Monday morning at the clinic.