We got to the clinic Wednesday morning with the plan of getting fabrication started with pouring casts and modifying while getting the clinic arranged for fabricating all the devices we had casted on Monday and Tuesday. We did do this...but we also had more patients all morning. We had 5 more patients come to the clinic on Wednesday. 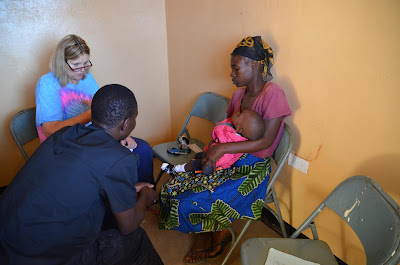 Nathan has cerebral palsy and was seen by Suzanne for orthoses. She was able to fit him with SMOs (a type of ankle brace) and work with his mother on strengthening exercises to have him do. 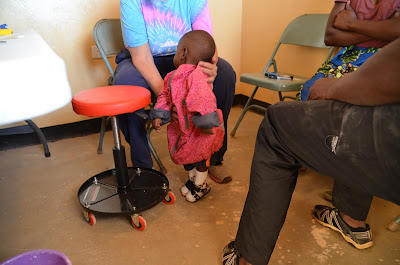 Suzanne showing Nathan's mom how to stand him while supporting his torso and head. 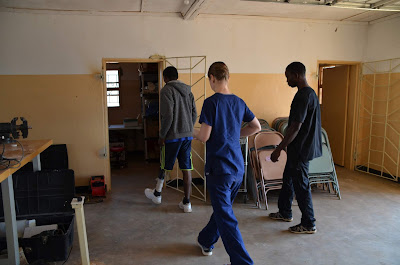 Christopher came for a check up on his above knee prosthesis. He needed a new sail, which is the cloth portion in the back. Measurements were taken to sew a new sail for him, and he was told to come back the following Wednesday. 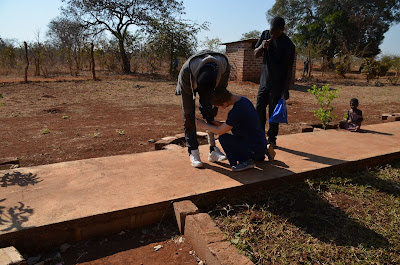 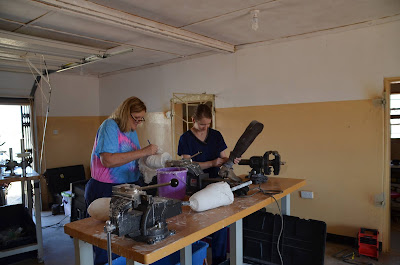 Suzanne was working on fabrication while I was working on Ruth's prosthesis. Ruth came for repair to her below knee prosthesis that she got in Lusaka 3 years ago. The foot was broken and needed to be replaced. Because some of the components of her prosthesis were rusted, we used the socket and attached it to new components and a foot. She also needed a pair of shoes since she only had slip on shoes that did not stay on the new prosthetic foot well. 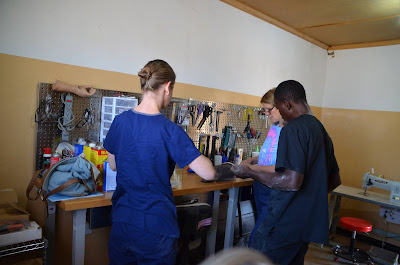 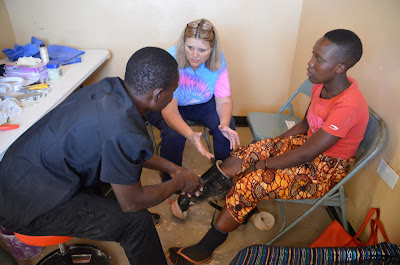 Joyce also came for follow up on her AFO (ankle foot orthosis) for her foot deformity. She was fit in April with the device to take pressure off her deformed foot and provide her with protection to the foot when she walks. She has been wearing it some but needed adjustment to the device. Hopefully with the modifications made to the AFO, she will be able to build up to wearing it full time. 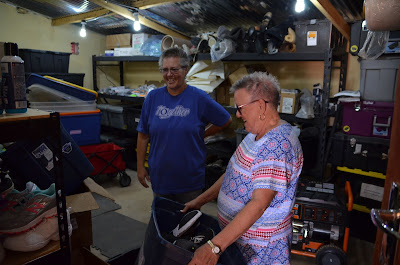 Louise and Gaye took all the bins with shoes and separated them by size, tied the laces together for pairs and re-organized them in bins with labels for the store room. SO HELPFUL! This also let us know what shoe sizes we really need for the next trip in April. 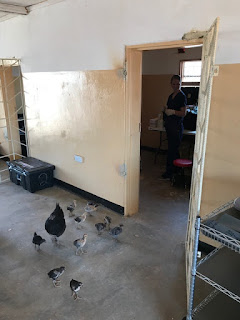 Orclay came for a below knee prosthesis. His amputation was in 2017. Staci, who lives at New Day, had told Orclay about us providing prostheses. So she arranged for him to come to the clinic. Here I am seeing Orclay in the patient room while the chickens visited the large room in the clinic. These chickens hung out at the clinic almost everyday. 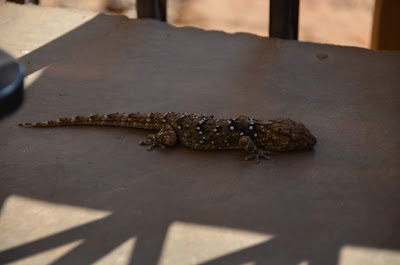 This odd looking lizard also hung out at the clinic, and seems to live in the storage room. 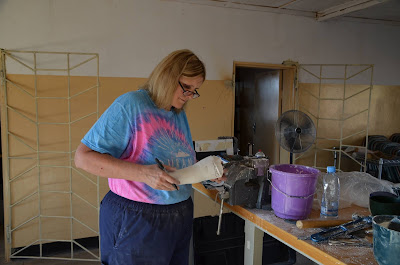 In the afternoon, Suzanne, Protashow and I were able to get several of the plaster models modified and ready for lamination. 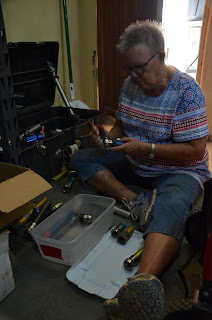 Louise worked on organizing the clinic and supplies and also helped 3 people who came for eyeglasses.

On Wednesday night after dinner, we went to Prayer and Praise with the kids and staff of New Day for singing some songs, prayer requests and praises, and prayer.