Protashow left before 8am with the bus to pick up patients at the Macha radio station. We were expecting 7 patients from the Macha area for fittings for Thursday. 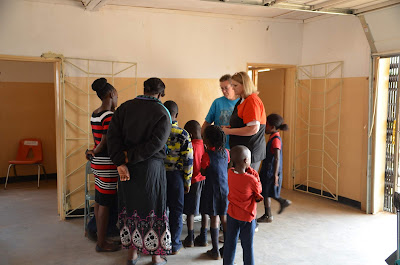 Before the bus arrived back the clinic with the patients, we had another class from New Day come to the clinic for a field trip. 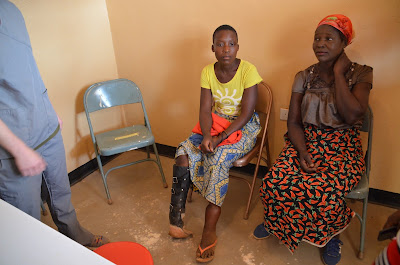 We also had Joyce come back for a follow up since her AFO was modified the previous week. 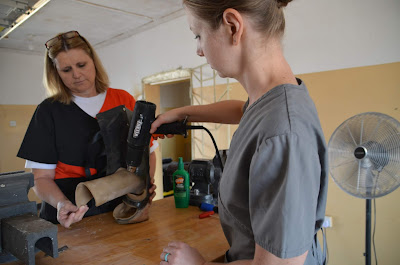 She only needed a small adjustment to the AFO. 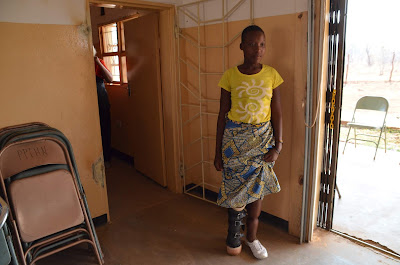 We told Joyce to come back to see us in April for another follow up. Her foot is looking so much better than when we first saw her in April, and now with the modifications that were made this time we hope she can wear the device full time and her foot will be even better when we see her next time. We'll never be able to correct her foot deformity, but our goal is to provide her with protection for her foot to walk. 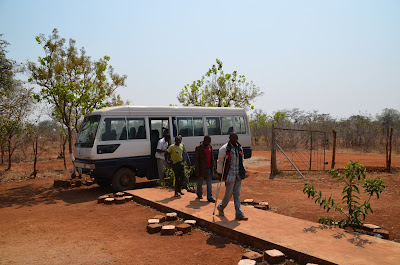 Patients unloading off the bus when they arrived at the clinic. 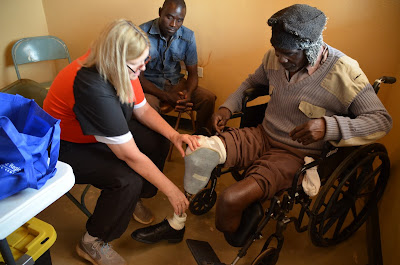 Daniel being fit with a prosthesis on the right side. His left side still needs to heal more before we can make a prosthesis for that side. 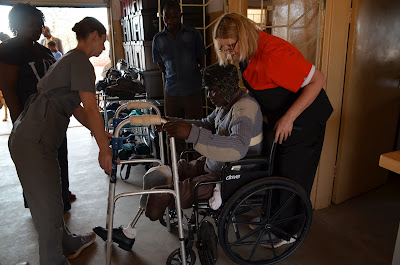 Daniel was given a wheelchair and a walker. He will use the wheelchair to be mobile and work on standing with the walker with the single prosthesis for strengthening and stretching until April when we can make him a prosthesis for the left side. 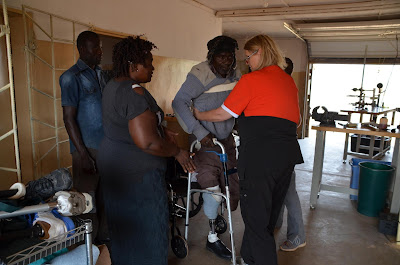 Working with Daniel on standing and balancing with a walker. 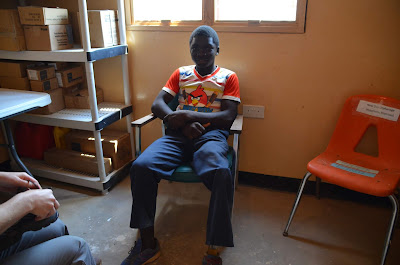 Trywell back for fitting of his new prosthesis. 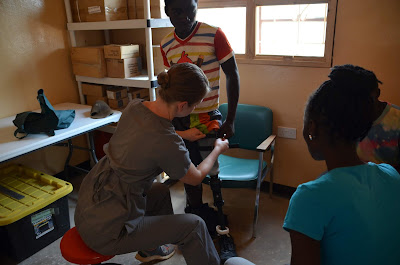 He's been wearing a prosthesis since 2014, so we didn't need to spend time going over instructions on how to put it on and take it off. 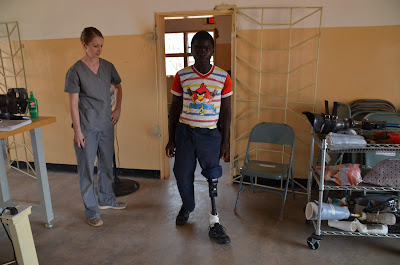 We did have to work on gait training since we used a different knee on his new prosthesis. It's a little heavier knee than he has used in the past, but since he's grown he can use this knee now. The advantage of the this knee is its durability and safety. 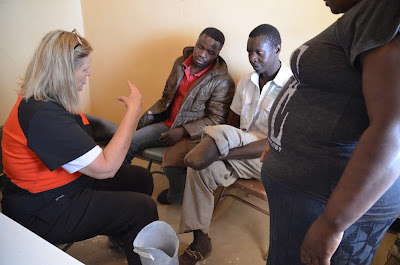 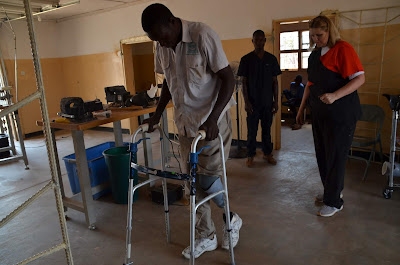 He started using the walker to get used to walking with a prosthesis. 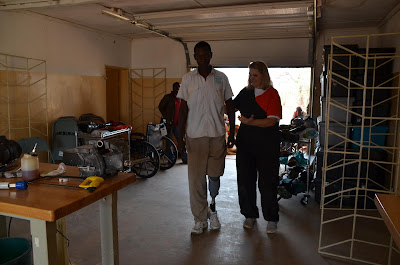 But he quickly moved to walking hands free. He had the biggest smile and was so excited to get a prosthesis! 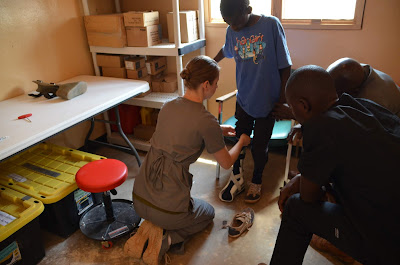 Harrington came with his grandfather for fitting of a new AFO. This AFO design is a different than the one we made in April, which should hopefully make it easier to put on. 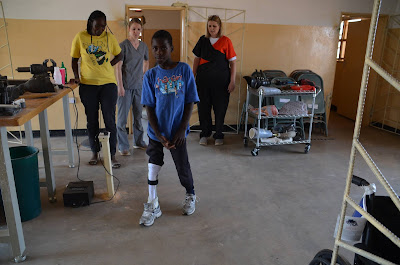 Because we could correct his deformity in the new AFO even more than in April, which came from stretching from use of the AFO every day since April, his gait was improved with the new brace. I hope to be able to get even better correction next April when we see him again. This makes me so happy to be able to provide him continued care with new AFOs and addressing his foot deformity over time! 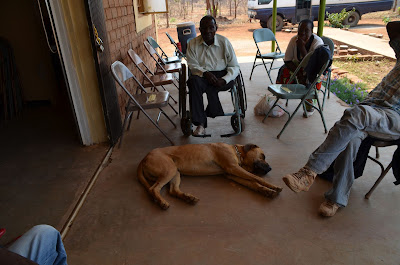 Danu hung out at the clinic all day, sleeping on the porch and keeping the waiting patients company. 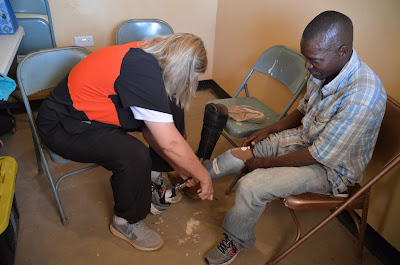 Mweetwa got a new prosthesis. 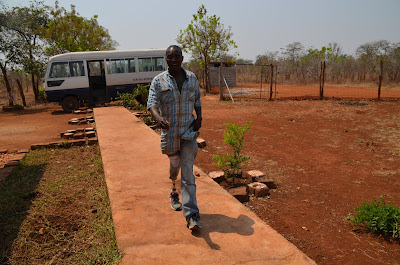 He's been wearing a prosthesis for so long that he walks like a pro. With his pants leg rolled down, you can't even tell he wears a prosthesis. 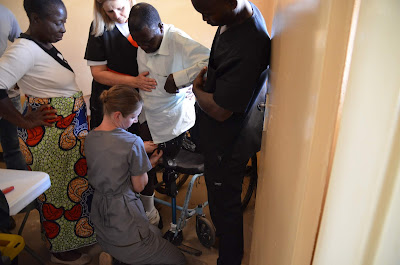 Dennis standing with help from Suzanne and Protashow on his prosthesis. 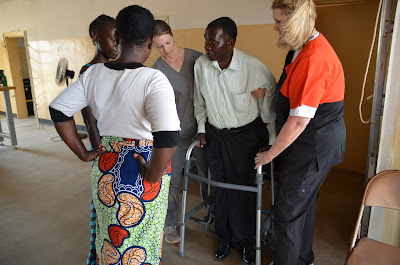 We gave him a walker to use for standing and walking. He is very weak right now, so we discussed standing and strengthening with his family. He will need assistance until he gets stronger. His wife and son came with him and were so attentive to all the instructions to help him. 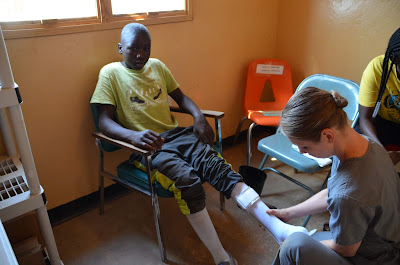 We had a new patient come on Thursday. Cheembe has a left partial foot amputation due to a snake bite in 2012. We fit him with an AFO and shoes to give him a stiff toe lever and help protect his foot. We will see him in April to make him a partial foot prosthesis.

Unfortunately, Haston did not come on Thursday for fitting of the bilateral AFOs we made for him. They did not have a phone number for us to contact them. Protashow will be able to fit Haston with the AFOs if they contact him or come to the clinic.

Throughout the day during all the patient fittings, Louise helped 3 more people with eyeglasses. I love the patient fitting days! It's awesome to see how people react when they get their prosthesis or orthosis, and how determined they are to learn to use it quickly. What a wonderful opportunity for us to be used by God to help others!