Saturday was the patient fitting day for people from the Choma area. Protashow left out for Choma with the bus first thing in the morning while we finished getting the last 2 prostheses assembled. We had 15 patients to see from the Choma area. 12 came on the bus back to the clinic, but 3 did not. We also had a lady come, Cledness, for a repair to her prosthesis. She really needs a new one, so we got her contact information to see her in September to make her a whole new prosthesis. 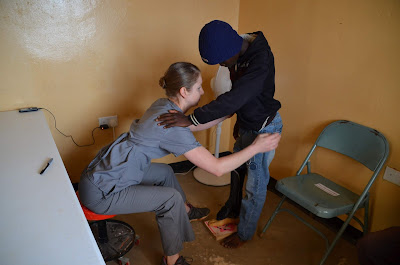 Here's Lucky getting fit with his device. This is another orthosis and prosthesis combined consisting of an AFO (ankle-foot orthosis) to support his ankle and foot with a pylon and prosthetic foot attached underneath to make up the difference in height. Lucky has a significant leg length discrepancy and has a fixed plantarflexion contracture due to walking on his tip-toes on the right side for so long. 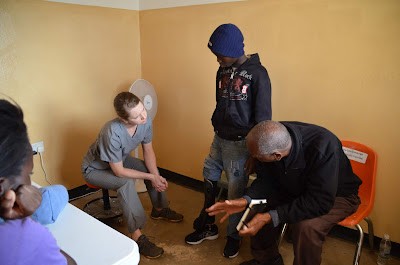 Pastor Webster came with Lucky and translated for us as well. Carolin knows Pastor Webster from Choma, which is how we found out about Lucky and his need for an orthotic device for his leg length discrepancy. 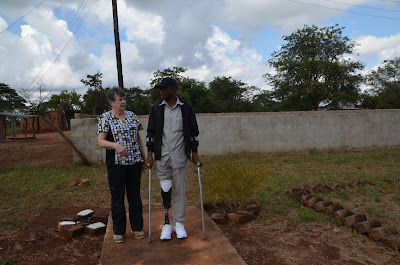 Chris talking with Christone for some gait training. 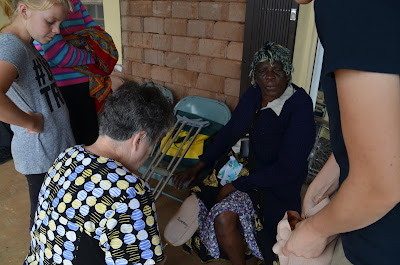 Chris fitting Rosemary with her below knee prosthesis. 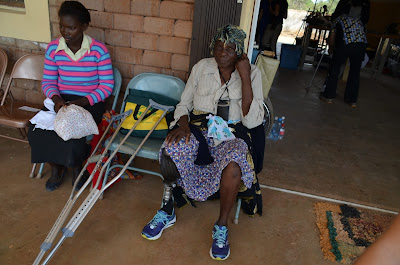 Rosemary after fitting of her prosthesis. 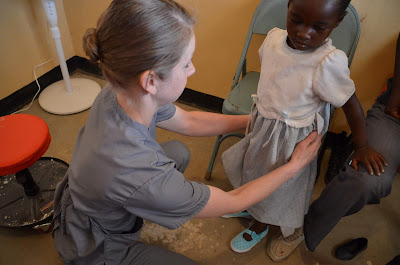 Little Rhoda getting her new bent knee prosthesis. Here I'm checking the height of the prosthesis by checking to see if her pelvis is level. 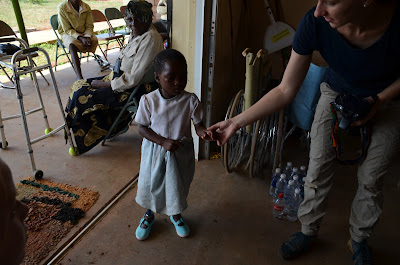 Carolin encouraging Rhoda to walk so I could check the alignment of her prosthesis. She's so shy around us. I'm hoping she'll get used to us and not be so shy, but I'm sure it's a scary experience for her to come to the clinic to be fit with her prosthesis. 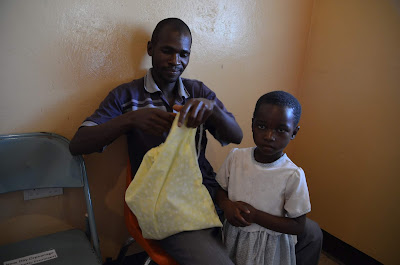 Rhoda and her father. She got extra prosthetic socks and an extra pair of shoes with her prosthesis. I let her father know that we will be back in September so we can check up with her. 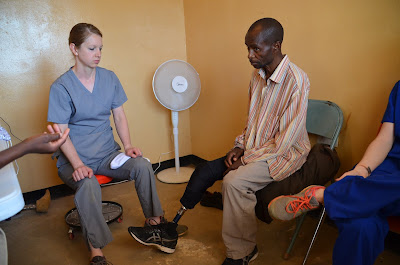 Giving Christopher some instructions about his prosthesis through a translator. 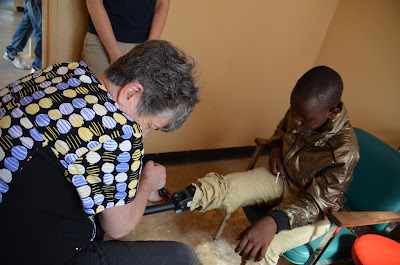 Here's Chris fitting Auvin with an above knee prosthesis. 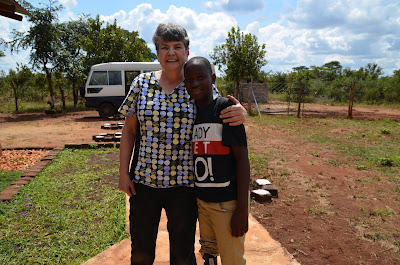 Chris got a picture with Auvin after they were finished with his prosthetic fitting. 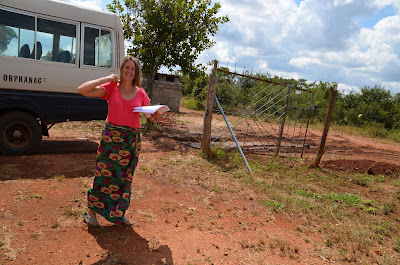 Staci stopped by to say hello. 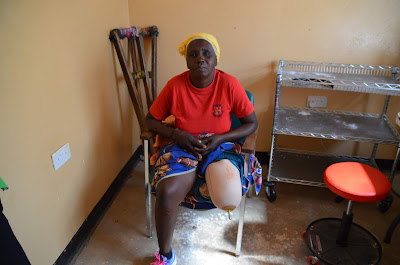 Here's Salia getting fit with her prosthesis. 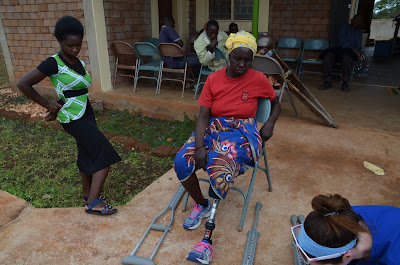 And then she worked with Amanda for gait training. Amanda is adjusting a pair of crutches for her height in this picture. 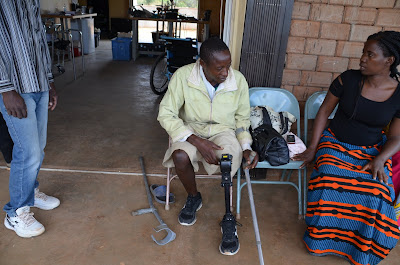 Here's Protashow on the left (he didn't totally get in the picture) talking with Visa about his new above knee prosthesis. 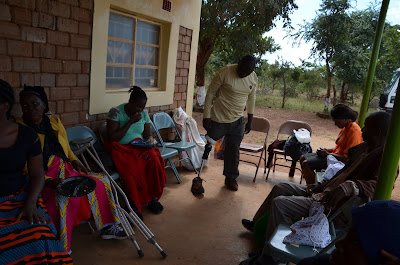 Lawrence working on bending the knee of his above knee prosthesis. 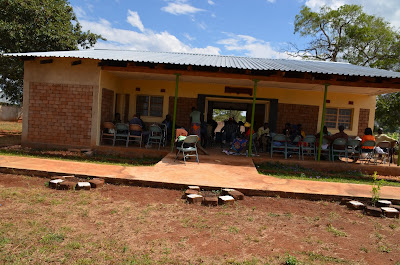 All the patients waiting on the porch of the clinic. 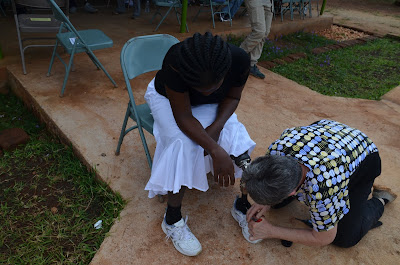 Chris working to adjust the alignment of Allister's prosthesis. 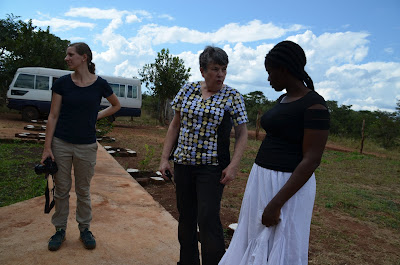 Chris giving more detailed instructions about walking with the prosthesis. We initially had Peter trying to walk with crutches with his above knee prosthesis. 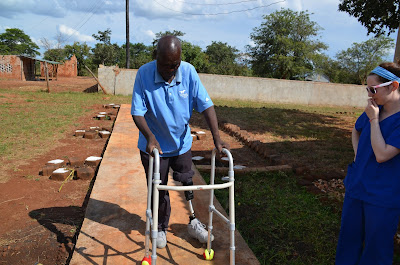 But we decided the walker was better for stability and safety for him. Amanda only had a brief time to work with him on gait training since he was the last patient fit and the bus was leaving soon. 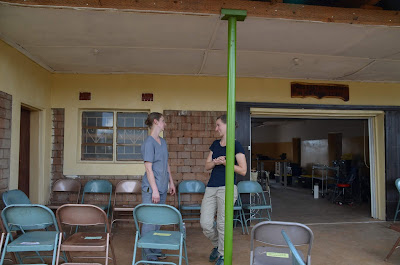 Got a picture of Carolin and my goodbye. She rode on the bus back to Choma to Children's Nest, the orphanage she volunteers at. She would be leaving later in the week to go back home to Germany and had more work to do at Children's Nest before she left.

The 3 patients who didn't come were Simon, Denis and Mainde. We had their phone numbers to call them, so we were trying to arrange for them to come on Sunday for fitting. The original plan was for us to all leave on Sunday for Livingstone, but we decided that Chris would stay behind to see the last patients while Protashow took Amanda and me to Livingstone on Sunday to see Victoria Falls before our flight on Monday.

*Next post: Sunday, May 6-Tuesday, May 8: Last patient fittings and travel home