Monday was again filled with fabrication for all of us, and we had 2 patients for fittings during the day---Melvin came for the new "sail" portion for his socket and we switched his foot to a different type to make him feel more stable, and a man came for a custom shoe. 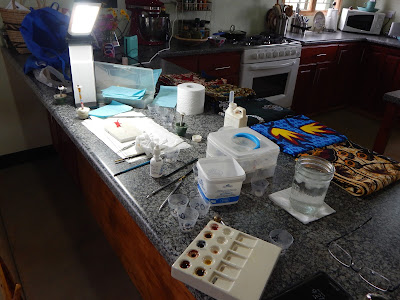 John's painting station at Ron and Dee's house. The painting part of the prosthetic eyes needs to be in a clean area without all the dust that is at the clinic. 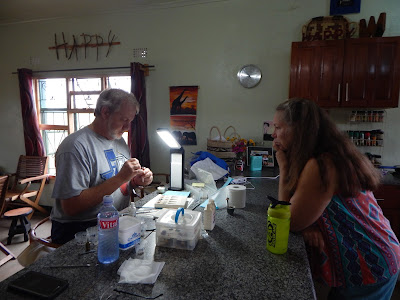 John had great company and conversation while finishing up the 2nd painting of all the eyes on Monday. 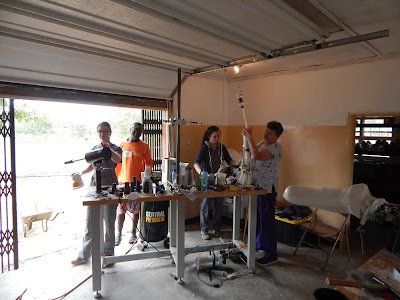 Lots of fabrication being done at the clinic. 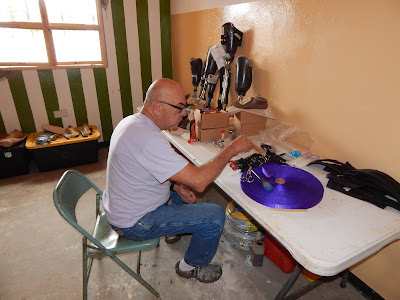 Rick diligently burning holes in the straps for sails. Bless him for doing all that tedious work. 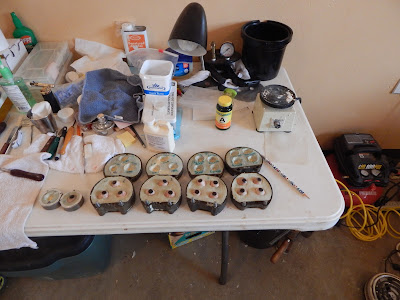 Prosthetic eyes in John's room at the clinic in another stage of the fabricating process. 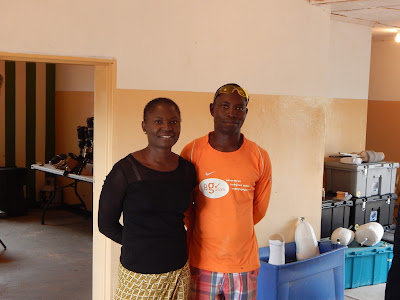 Obligatory sibling photo. Fostina (who cooked for us during our stay) is Protashow's sister. She came up to the clinic to check out all we were doing. 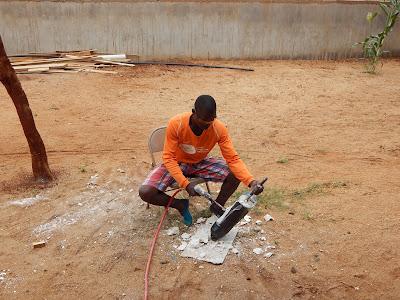 Protashow breaking plaster out of a laminated prosthetic socket. 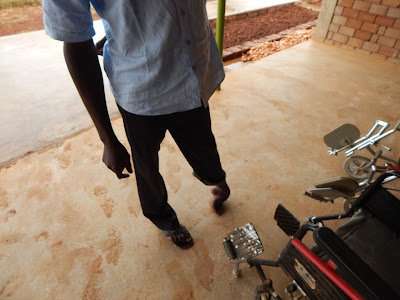 This guy, who is a teacher, came on Monday for fitting of a shoe for his deformed foot. He stands on his tip-toes and literally walks on the front of his ankle. This is one of the only patients we knew before our trip that we would be seeing. Dave, who helps in getting the shipping containers shipped to Zambia and also makes regular trips to Zambia himself on mission trips, knows this teacher from one of the schools he visits. This man has had a foot deformity for many years and cannot wear a shoe. We received pictures of his foot before our trip. I brought a pair of custom shoes that had not worked for a patient back home to try to use for this man. 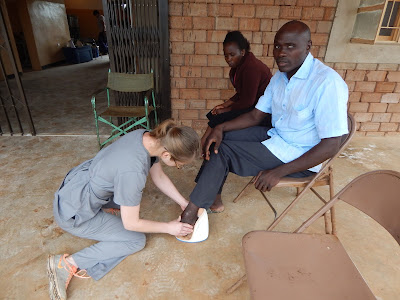 Attempting to fit a shoe insert to support his foot, which ended up not working. He said he doesn't have pain in his foot unless he steps on a rock or something hard. He just wants a shoe he can wear on the foot to protect his skin from rocks. 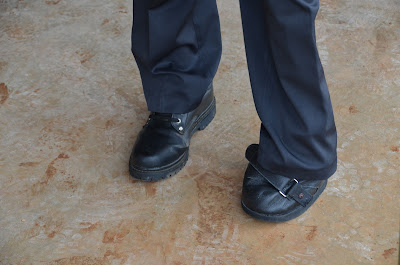 I ended up fitting the custom shoe sideways with just a soft, flat insole. Definitely not the ideal result, but he could not tolerate any support of the deformity. This achieved what he wanted, which was a shoe that protects his skin.

This man's foot deformity is extremely severe. I talked with him about whether he had discussed amputation with a doctor. He said he has been to a hospital in Lusaka (capital city) and they told him he would have problems if he amputated the foot. This is a good example of differences in medical care between Zambia and in the States. Perhaps the doctor he spoke with was thinking he'd have issues with access to prosthetic care....just not sure. I encouraged him to talk with another doctor and consider an amputation. I was also able to show him a prosthesis and explain how it works and fits. Please pray for this man as he considers whether or not to pursue an amputation of his deformed foot.

On Tuesday, we did fabrication all day. The electricity went out in the afternoon for several hours. Thankfully Chris wasn't in the middle of a lamination, which could have been ruined by not having vacuum during the process. We got the generator out and going, which supplied us power for quite a while. We took a little longer dinner break in hopes the electricity would come back on. It did come back on, so we went back to the clinic to work till about 9:30pm. 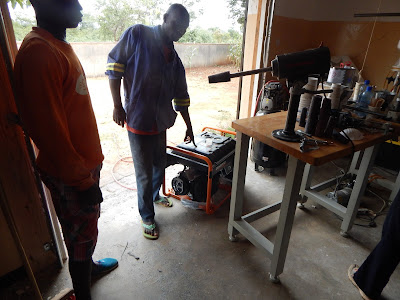 The generator being set up.

Wednesday was crunch time to get prostheses ready for all the Thursday patient fittings. John also had a patient on Wednesday, who is a friend of Esther's. Esther is the lady who has cooked for us during past trips to New Day. She told her friend about John's work in making prosthetic eyes, so he was able to come see John this year. 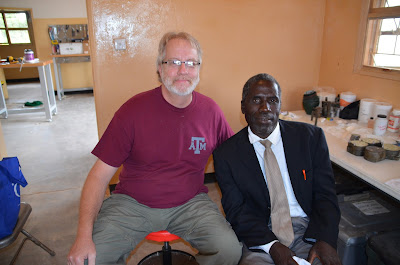 John and his patient on Wednesday. 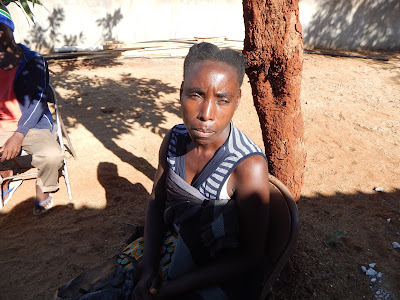 This lady had come to see John during our evaluation days. She needed to see an eye doctor, so John gave her money for transport and to see the doctor in Zimba at the eye clinic. 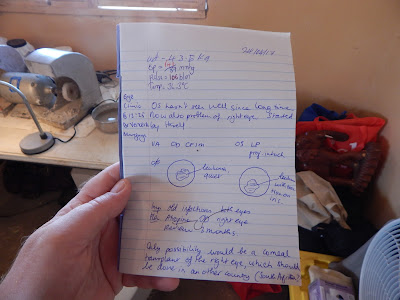 She brought back the report from the eye doctor in Zimba for John to see.


At the end of the day Wednesday, we had prosthetic eyes and legs all ready to go for patients coming on Thursday. We only had 5 prostheses left in fabrication, which we would work on after the Thursday group of patient fittings was finished. We also had cleaned the clinic up by sweeping it out and re-arranging to be ready for patient fittings starting Thursday. 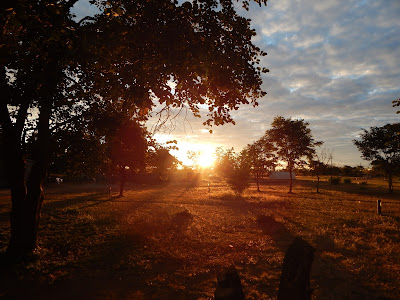