Every trip we have been splitting up the patient days into a "Macha" group and "Choma" group (these are both towns nearby). The patients from the Macha area meet at the radio station in Macha, which has been announcing our arrival for over a week, and the bus from New Day picks them up. This year the radio station interviewed Elizabeth (social worker at New Day) before we arrived about our prosthetic work, so definitely got the word out about what exactly we do.

We always do the Macha group first since those people are from the more rural areas and therefore generally don't have the means that people from the Choma area have. (Choma is a larger city). We are only there for a short time, so we can only see so many people. This year, we did have to turn some people away due to shortage of time and materials.

Wednesday morning started with John and Chris riding with Protashow on the bus to Macha to screen patients and bring back those we would be seeing at the clinic. Traci and I stayed behind with the intent to get work done at the clinic on the prostheses that were already in fabrication from Tuesday's patients. We ended up with 3 prosthetic patients at the clinic before the bus came back, plus a little boy with bilateral clubfoot. 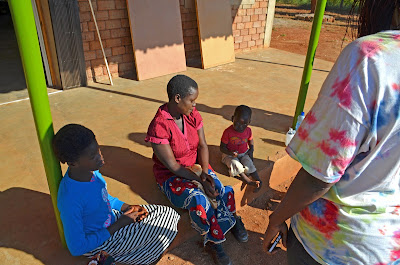 This little boy has clubfoot of both feet, so he can't walk at all. He had surgery on his feet at some point, which we didn't gather at what age. But because he has not been treated with braces since then, the deformity has re-occurred. Both feet were too rigid to be able to fit him with braces for him to walk. Traci and I were talking with his mother through a translator. This was a heartbreaking conversation. 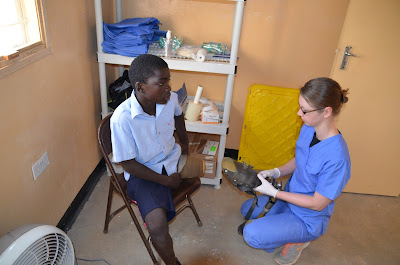 Arnold came with his father for a new prosthesis. Last year he was at school during our trip in September, so I repaired his prosthesis that he left at his village since a piece was broken but I did not get to see Arnold. This year he needed a whole new prosthesis. From our conversation with his family last year about him being in school when he was not in years past, Prosthetic Promises is now helping pay for his school fees to ensure he is able to continue with school each semester. (They are out of school in April. It's a year-round school system in Zambia.) 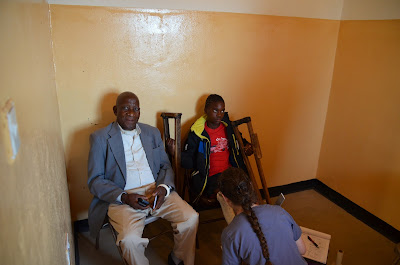 This is Clyness with her grandfather who came with her. This is another heartbreaking story because we were unable to fit her with a prosthesis due to a large wound on the bottom of her leg that will most likely require a revision to a higher amputation length. She has a Symes amputation (at the ankle, so just the foot is amputated). Symes is a good amputation length because neither leg bone is cut so the patient can put weight on the bottom of the leg. She has been walking around, seemingly since a very young age, without any protection on the bottom of her leg. On Wednesday when she came, we couldn't tell much because of a lot of black substance in and around the wound, which her grandfather said was "African medicine" so we had no idea what exactly it was. We cleaned the wound and sent her with supplies to continue wound care with careful instructions, but when she came back we could tell just how bad the wound was. We emphasized many, many times to her grandfather that she needs to see a doctor and have another surgery. Please join us in prayer for this young lady, that her grandfather will seek the medical treatment she needs and for her health. We hope to see in her the future and be able to make her a prosthesis once she is well healed.

Melvin also came Wednesday morning. He is a patient we have seen since 2014. His prosthesis was fitting well, so he just needed a new cloth portion, called a 'sail', made for his socket and new supplies. We told him to come back Monday for the sail and supplies.

Meanwhile, at the Macha radio station John and Chris were screening all the people who had come with Protashow translating. 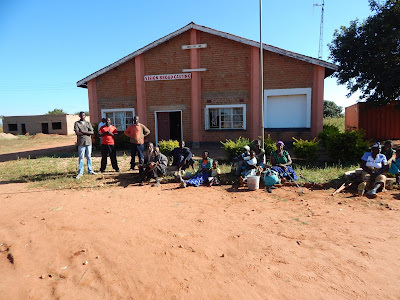 There were a lot of people waiting at the radio station! 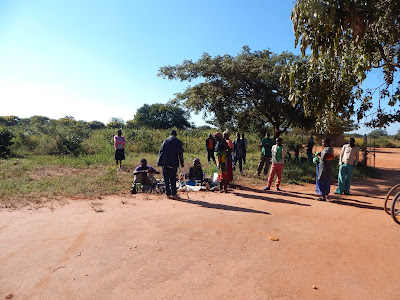 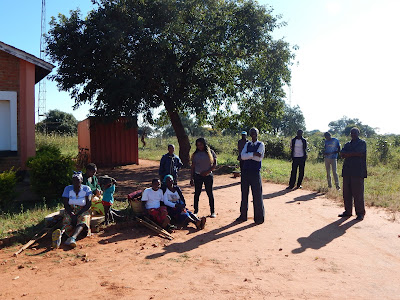 After they had talked with everyone and determined who would be coming back to the clinic, they loaded up and headed back to New Day. The bus arrived with John, Chris, Protashow, 9 prosthetic patients and 11 eye patients. 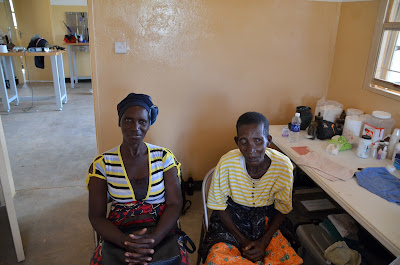 One of John's eye patients. John had 11 patients on Wednesday---8 new people and 3 for follow-up and polishing. 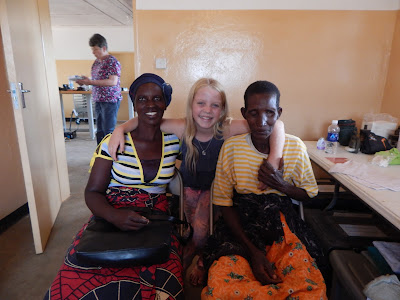 Cambree was John's assistant for patient days. She translated and took notes for him. I see a health care career in her future. :) 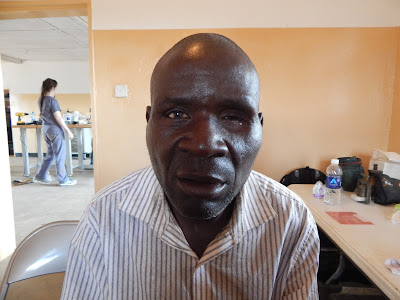 This is Elias. John took an impression for a prosthetic eye for him. 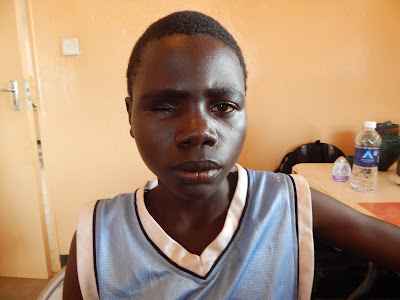 This is Alfred. He lost his eye due to a sling shot injury. 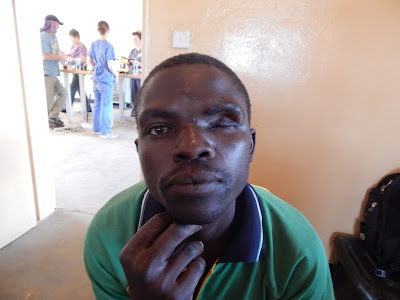 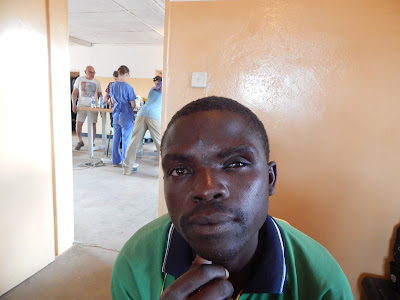 ...After. This man had a prosthetic eye that just needed to be cleaned and polished. 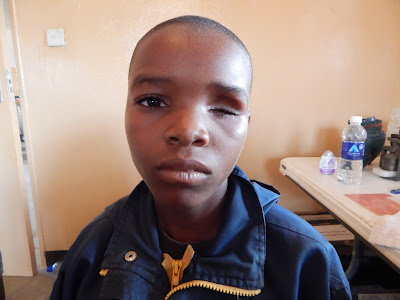 This is Kennedy. He lost his eye due to an injury with a stick. 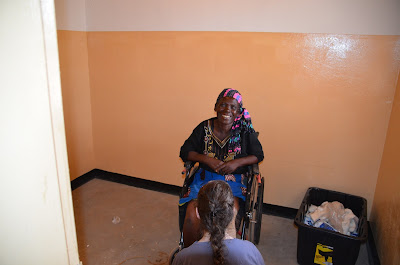 Traci casting Rose for her first prosthesis. Her amputation was actually earlier this year due to diabetes. This a rare instance where someone didn't have to wait a long time between their amputation and when they were fit with a prosthesis. 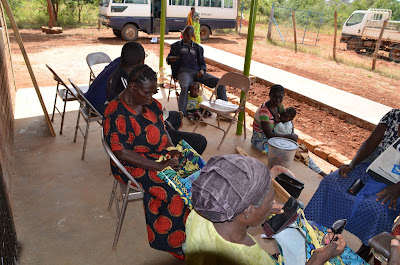 Patients waiting on the clinic porch. 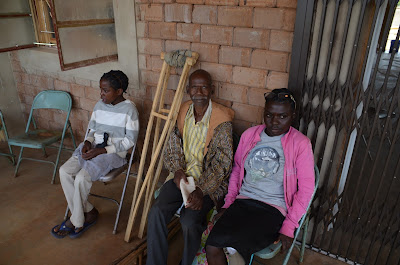 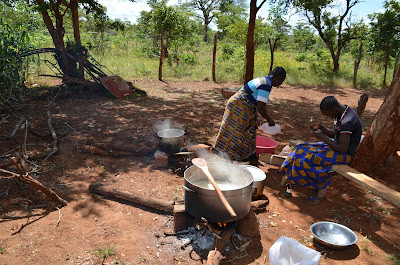 The ladies cooking lunch for the patients. Since people have to wait for hours because it takes so long for us to see everyone, they are fed lunch of nshima (ground maize dish), cabbage and beans. 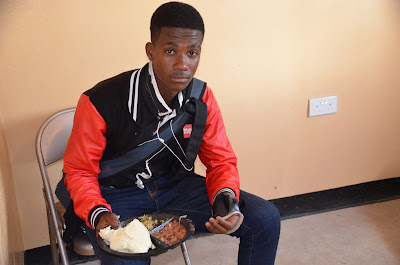 This is Arief (holding his lunch--the white mashed potato looking food is nshima) who came for fitting of his thumb prosthesis this year. Suzanne casted him last year and made the prosthesis back in the States. We had gotten his phone number and called him to come for fitting this year. The thumb prosthesis fits sort of like a glove with strap to tighten it. The rigid prosthetic thumb will give him the ability to grasp objects in his left hand now. 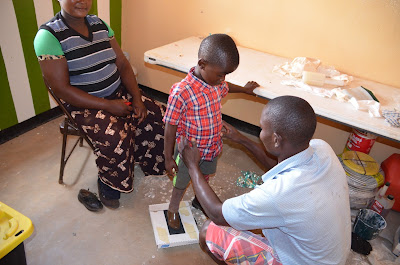 Here's Protashow evaluating little Blessford for correct height. Blessford had a straight leg prosthesis from the capital city of Lusaka (over 250 km away), but it's too short since he has grown. The prosthesis was lengthened, and we will bring a pediatric size knee for him next year to make a new prosthesis that has a bending knee. 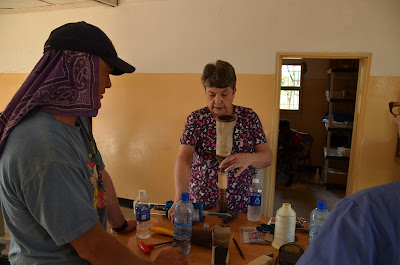 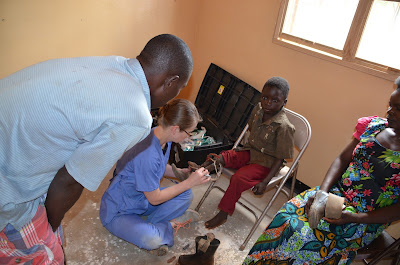 This is Ackim, who has fibular hemimelia and has an extension prosthesis from a clinic in Monze. The prosthesis was modified for his growth and new straps were put on. We also gave him a pair of new shoes.

We also saw David, Gift and Lucy for casting, who are new amputees getting their first prosthesis. Jessica, Mweetwa, Musanda and Rhoda came again this year for follow-up. They needed adjustments, a few new parts and new supplies. Rhoda is the little girl with clubfoot that we made a bent knee prosthesis for last year. We had brought a foot specifically for her size this year. And we had some new shoes for her. The children's shoes donated by Mrs. Reaves' 2nd grade class in Sanger, TX were a huge help with the pediatric patients we had on Wednesday.

Wednesday was a busy day with 14 prosthetic patients total and 11 eye patients. We were looking ahead to another full patient day on Thursday with patients from Choma.