Again Thursday we split up, with John and Chris riding in the bus with Protashow to go to Choma to screen patients and bring back who we would see. Traci and I stayed at the clinic to work on fabrication of the prostheses we had already casted for during the past two days. 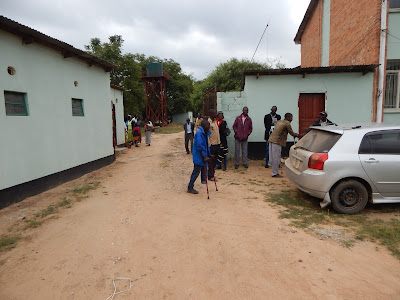 Arriving at the Disabilities Office in Choma to screen patients. All the patients met at the Disabilities Office in Choma Thursday morning. John and Chris saw each person there to determine if we were able to help them. Many of the people who come to see John are not candidates for fitting with a prosthetic eye. And Chris had to determine how many people we could see. We did have to turn away some people for prostheses this year because of lack of time and materials. 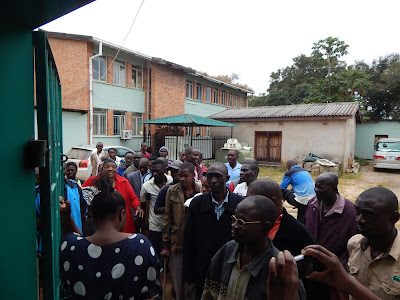 Everyone lined up and seen one at a time by Chris and John for evaluation. 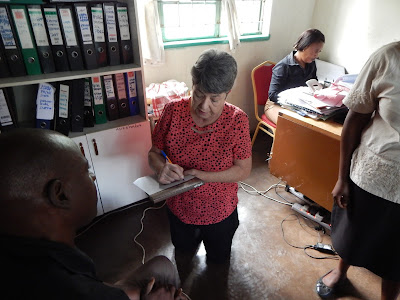 Chris and John saw people in this small office area. "Overwhelming" was the impression I got from their description of how the morning went. So many people there at Choma waiting and knowing how many we had already casted at the clinic the past two days, they were faced with deciding who we would see and who would have to be turned away this year. 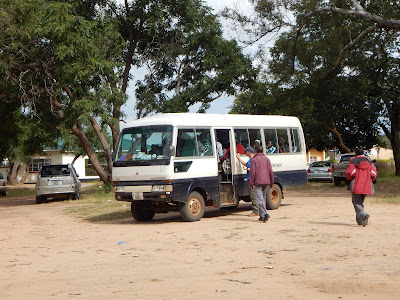 Loading up in the bus to head back to New Day to the clinic. 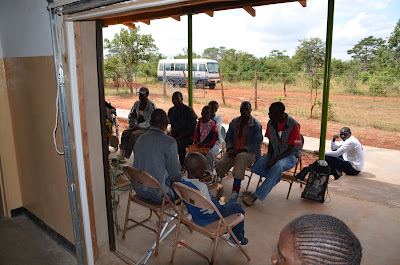 Everyone waiting on the porch of the clinic when they arrived. 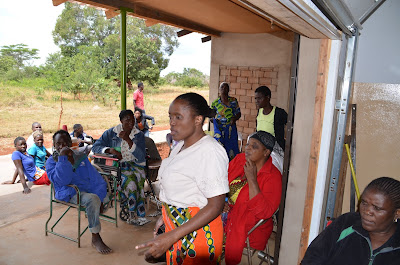 The lady in the front of the picture with the orange skirt is Hildah. She works at the Disabilities Office in Choma and helps coordinate patients for us to see each trip. 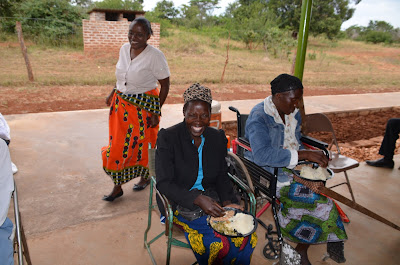 Patients eating lunch while waiting on the porch of the clinic. The same ladies who cooked for the group of patients on Wednesday came and cooked lunch of nshima, beans and cabbage for patients on Thursday as well. 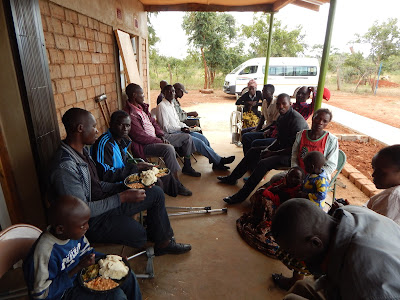 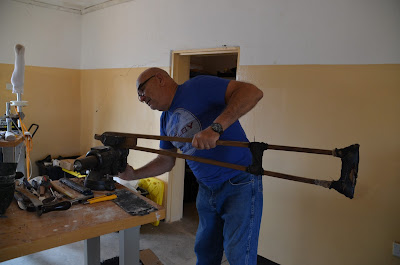 Rick became crutches repairman extraordinaire. Many of the patients who came had crutches needing repair or new crutch tips. It was great that Rick could spend time repairing crutches while we were seeing patients for evaluation and castings. We did not have new crutches for people this year since the shipping container has not arrived yet. Next trip, there will be lots of donated crutches that we will be able to give to people if their's are in disrepair. 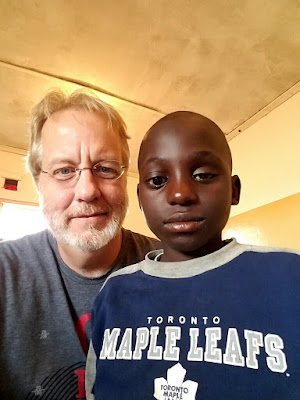 A great picture of John and Mivet. Mivet is 8 years-old and lost his eye to an injury from a stick. John saw him in September 2016 for the first time and made his eye then. This year, he just needed a check-up and cleaning of the prosthetic eye. 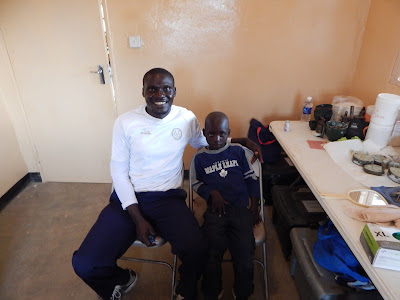 John has an opportunity to talk more in depth with his patients due to the time it takes to take impressions and fit them with their prosthetic eye. Last year when John first saw Mivet, John also took impressions of Mivet's father for partial teeth. He made the teeth back in the States and brought them to fit this year, which fit great! What an awesome opportunity to help both Mivet and his father! God has blessed John with such amazing talents. 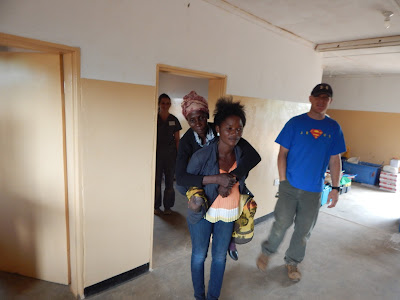 A lady who Traci casted for a prosthesis. Her daughter carried her off the bus, into the clinic and back out. 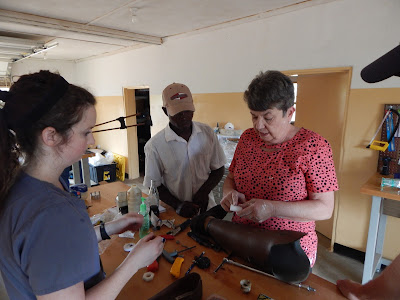 Protashow getting instruction from Chris on repairing a prosthesis.

Thursday we saw 16 prosthetic patients---12 of those were casted for new prostheses, 3 people were for repairs and new supplies, and 1 lady was not a candidate for a prosthesis. John saw 9 new patients for prosthetic eyes and 1 check-up (Mivet). Chris had also seen 6 people in Choma that just needed new supplies, so she gathered those and sent them back with Protashow on the bus to give to these people when he drove all the patients back to Choma. 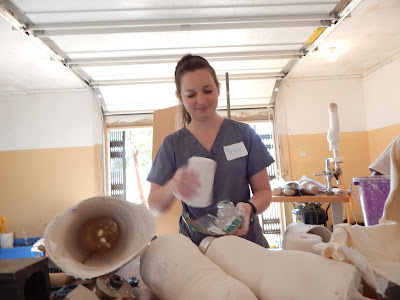 Traci getting casts ready to fill with plaster after the patients had left. 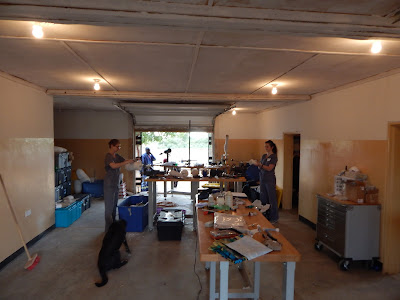 Traci and I modifying plaster models. By the end of the day we had 9 plaster models ready for lamination, which is the next step in the process of making a prosthesis. We would get started with laminations first thing Friday morning. 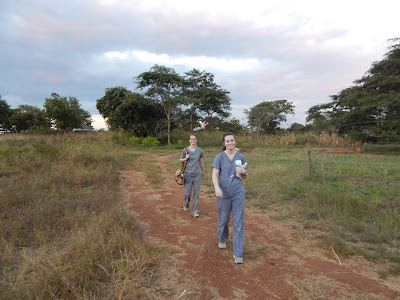 Walking back to The Ark (guesthouse) after our work day was complete. 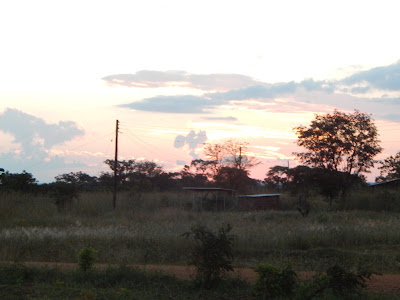 A beautiful sunset in Zambia. I always love my time in Zambia. Yes...we are working longer, harder days than what we do at our jobs back home, but it is so rewarding to "be spent by God's work" as Chris puts it.