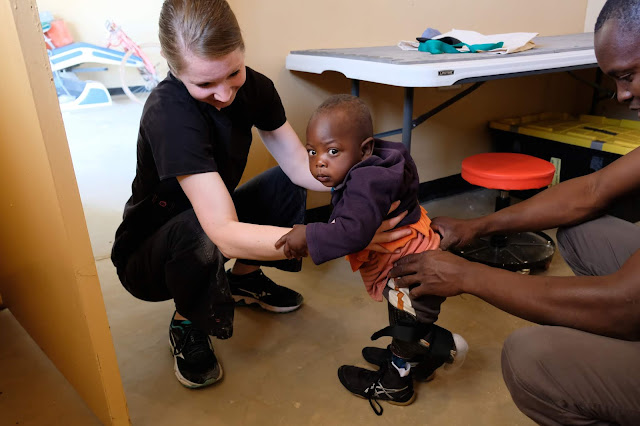 Friday was our biggest patient fitting day, since it also included people for repairs from Choma who couldn't fit on the bus the previous week, plus a few more past patients who had heard since the previous week that we were there and came for check-up. We had 16 prosthetic/orthotic patients and 8 ocular patients on Friday. 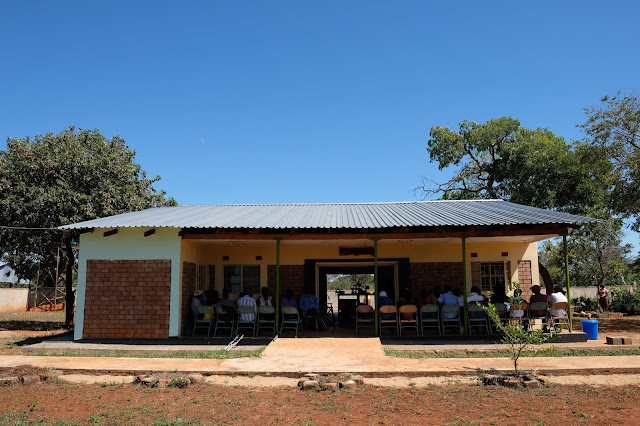 Our porch "waiting area" at the clinic. 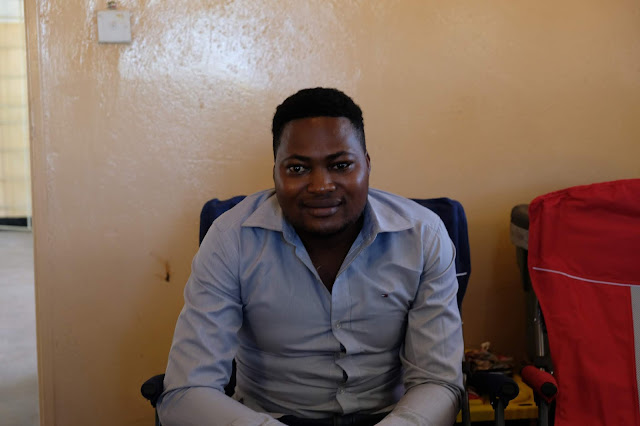 John has been seeing this young man for three years now. He just needed a check up and polish of his prosthetic eye this trip. 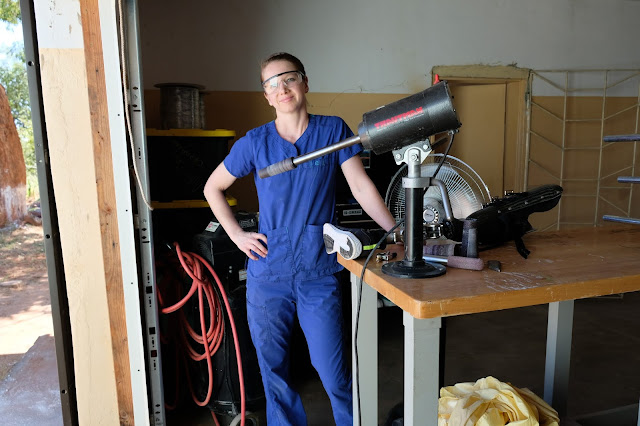 This is my "why are you taking a picture of me in safety glasses" pose. Making OSHA proud...all the way in Zambia. 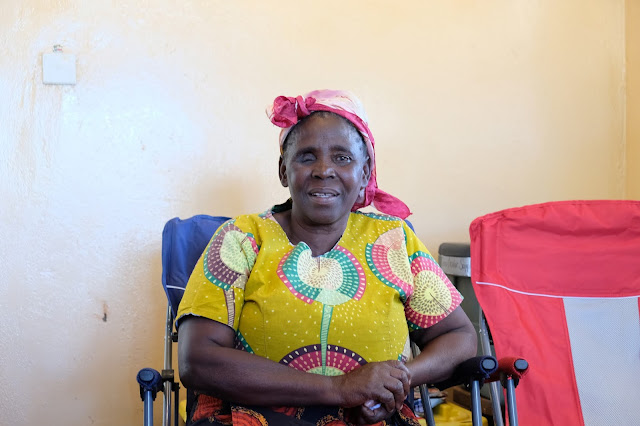 This is Emma. This was her first time to come see John. She still had her eye but it was badly damaged, so he was able to make her a scleral shell. It is very thin and covers the damaged eye. 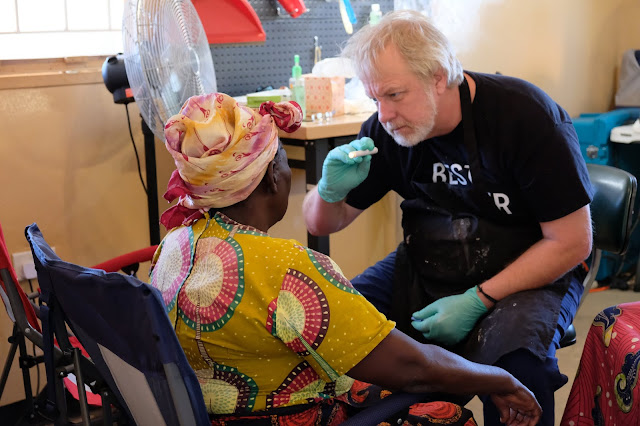 Checking the reflection on the prosthetic eye to match the sound side. 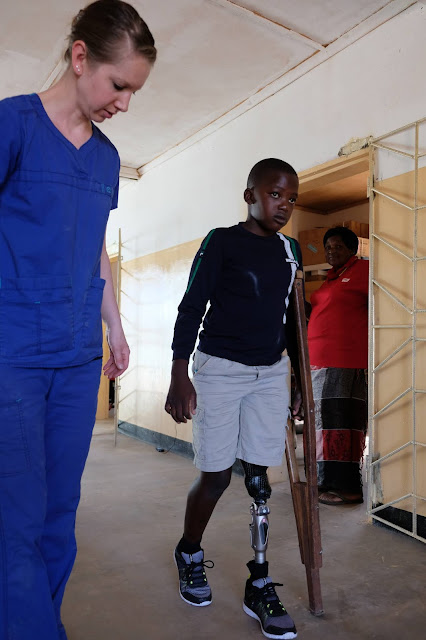 This is Steward, who did very well walking with his prosthesis for the first time! He was very serious, but I think he was just concentrating and making sure he was learning everything correctly. 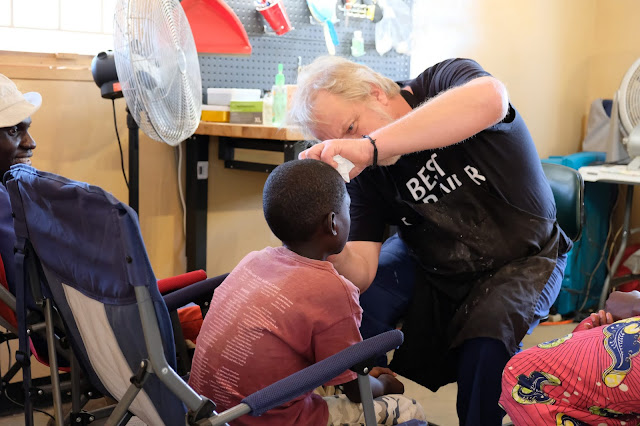 Mivet came for a check-up and polish of his prosthetic eye. John will plan to make him a new one next year, as he is a kid and growing. 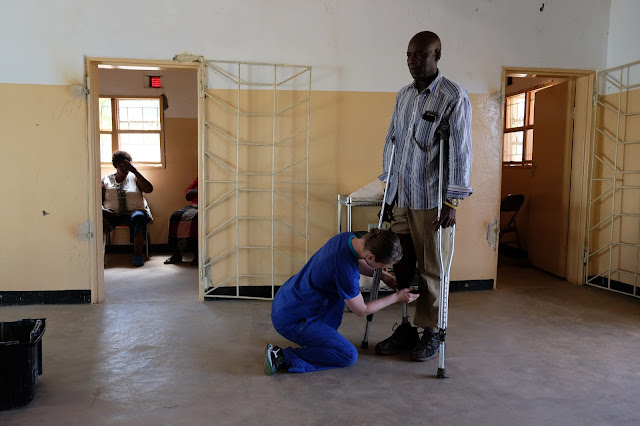 Making an alignment change for Mutukwa's prosthesis. He did very well walking with the prosthesis and will be walking without crutches in no time! 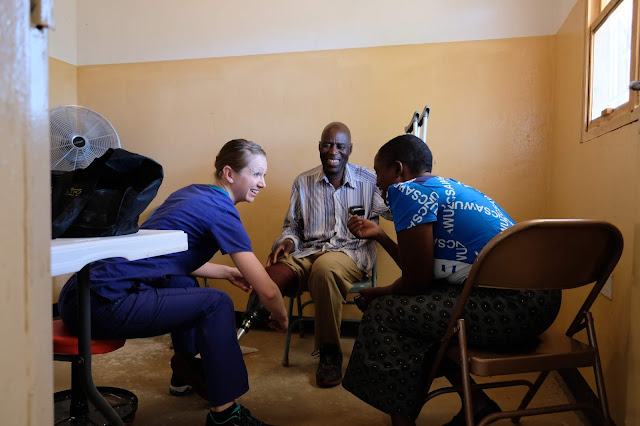 I had Mutukwa come back into the room to sit for me to make sure everything was secured with Locktite before he left. I'm not sure what was so funny in this picture, but I'm assuming it was some translation hilarity. I love that the people we see are so full of joy....we get to laugh at the confusion we often find in using interpreters and translating instructions. I keep trying to learn more phrases in Tonga that are useful when seeing patients, such as "sit down", "walk", etc.....that's always fun to see people's reactions when I say something in Tonga (probably terribly pronounced). 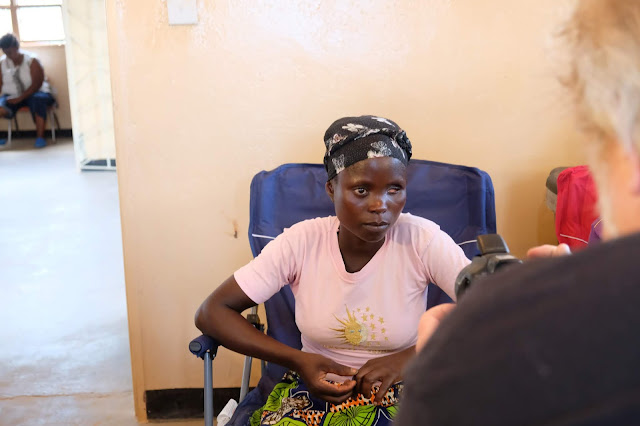 Onester came back for fitting of her new prosthetic eye. 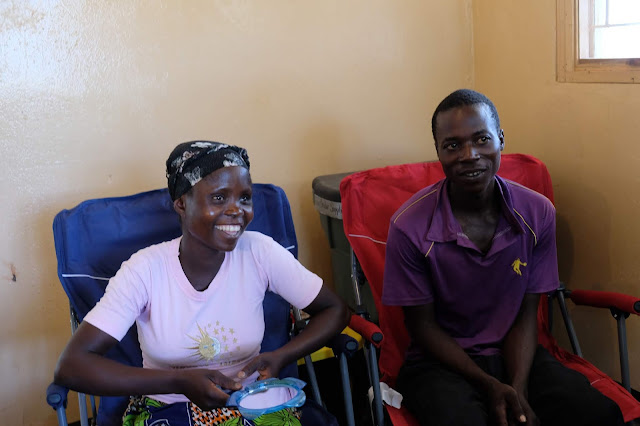 Such a beautiful smile and happy result! 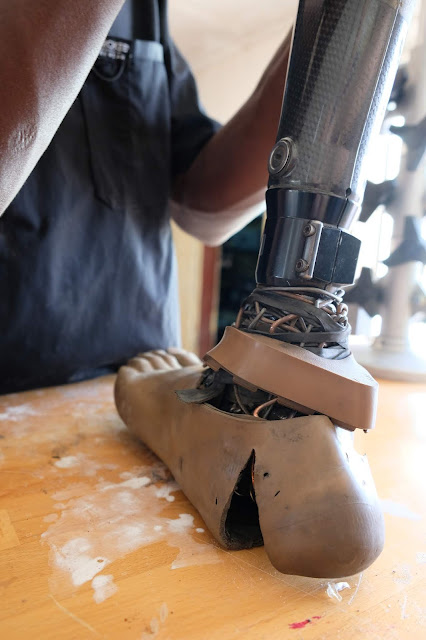 Protashow was seeing patients on Friday for repairs. We got this interesting home repair to fix. Lots of wires to try to hold that broken foot together. Protashow replaced the broken foot and got the patient new prosthetic supplies. 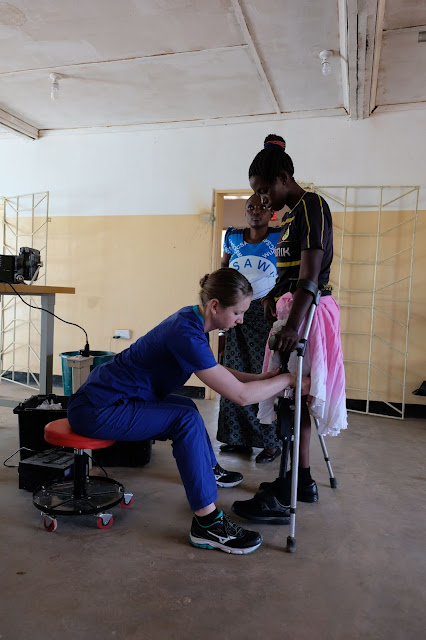 Here I'm making a change to Memory's new above knee prosthesis. She used her forearm crutches for walking during the fitting, but then practiced up and down the sidewalk outside the clinic afterwards without using crutches to get the hang of making the knee bend. 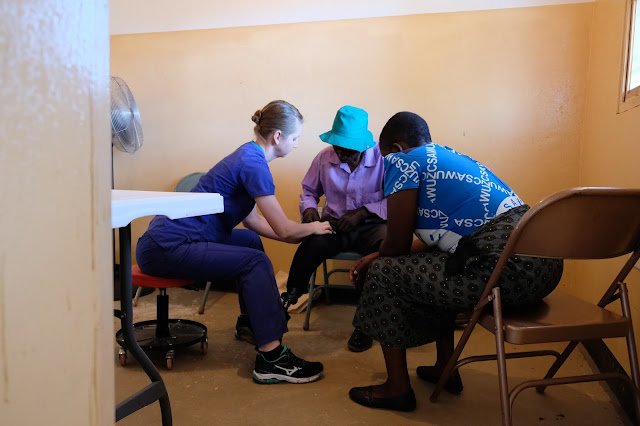 Here I'm fitting Paul with his new prosthesis. He's worn a prosthesis before, which was broken beyond repair. The new prosthesis is quite a bit different in style and components, but he did very well. Paul doesn't need to use crutches or a cane at all to walk. 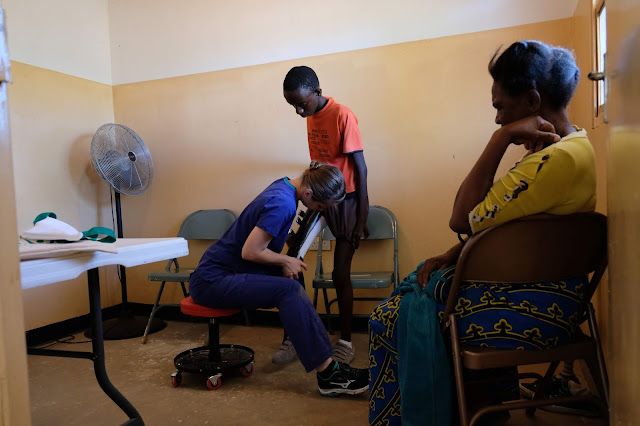 This is Alan. His amputation was three years ago due to a congenital deformity which shortened his right leg, and has affected his left foot and both hands. His current prosthesis was three years old and the only one he's ever had. It was definitely too short and getting way too tight. His amputation is a knee disarticulation, which is where the entire femur is still present. This allows for what we call "self-suspension" where the prosthesis holds tight over the end of the femur condyles to hold the prosthesis on. This fitting took a while to get the prosthesis just right to hold tight enough around his thigh while still allowing him to get it on. 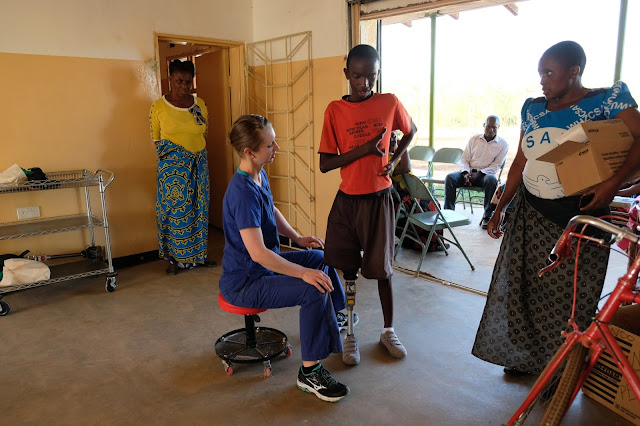 Since Alan has been using a prosthesis, he didn't require much instruction. This prosthetic knee works differently than his old prosthesis, so it took only a little instruction and practice. 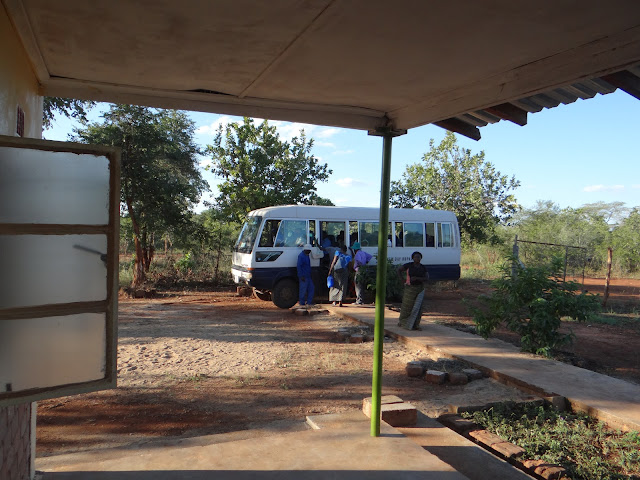 All the patients loading back up on the bus to head back to Choma after everyone had been seen.

Friday was wonderful and exhausting. We got to see a lot of smiling faces as people got their new prostheses or came for follow up. It's always so good to see people again and again for follow up---to make sure we continue to take care of their prosthetic needs, but also to see them, develop that trust and relationship, and show we care so much for them.

Saturday was our last day to work at the clinic. We were expecting 3 people for fittings and ended up seeing 2 more people for follow up/repairs. After the patients were finished in the afternoon, we packed everything up till next trip (while putting components and tools in an easily accessible place for Protashow to get to for any repairs he needs to do before September). 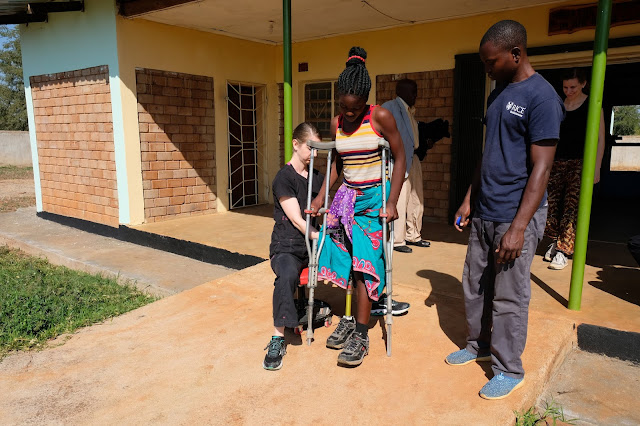 On Saturday, Clyness came with her grandfather for fitting of her knee disarticulation prosthesis. She did very well after some instruction on how to bend the prosthetic knee when she moved the prosthesis forward. I'm sure she will be walking without crutches very soon. She is very shy and timid, so I wasn't quite sure how happy she was or if she felt like it was more difficult than she anticipated....just not a lot of feedback. But I did assure her, through Protashow translating, that we care for her very, very much and want to be able to continue seeing her for follow up. We asked her grandfather to bring her in September for follow up, and I hope to see her walking without crutches then. 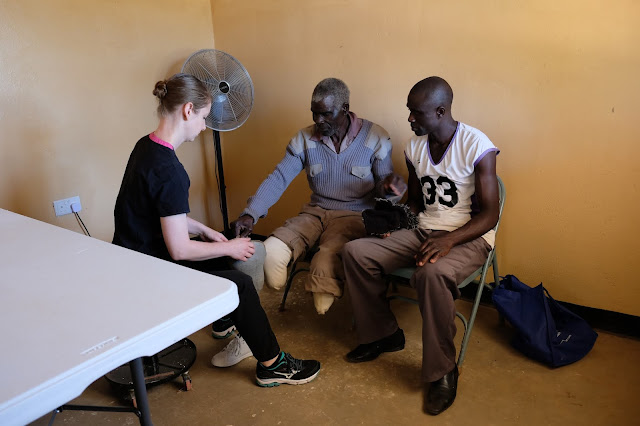 Daniel came back for fitting of his left below knee prosthesis on Saturday (his right was fit in September 2018 when the right leg was healed and the left leg wasn't). I'm going to be totally honest, I was thinking this fitting wasn't going to go well. When he came for casting for the left side this year, his son who brings him, said he hasn't been standing much with the right prosthesis. I had him stand on the right side to evaluate his strength and how tight his muscles were at the knees and hips, which was not a lot of strength with knee and hip flexion tightness. 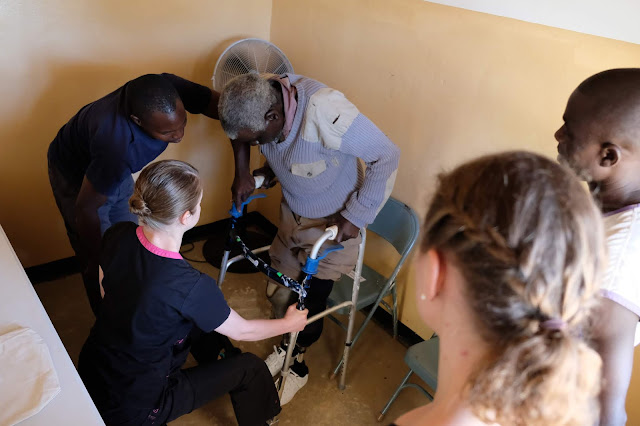 Well Daniel just proved me totally wrong. He stood with the walker and was able to walk from the clinic to the gate to get on the back of the motorbike his son brought him on. Daniel showed sheer determination to walk. He assured me several times, as did his son, that he will be wearing the prostheses every day, practicing and getting stronger. And I'm sure he will! 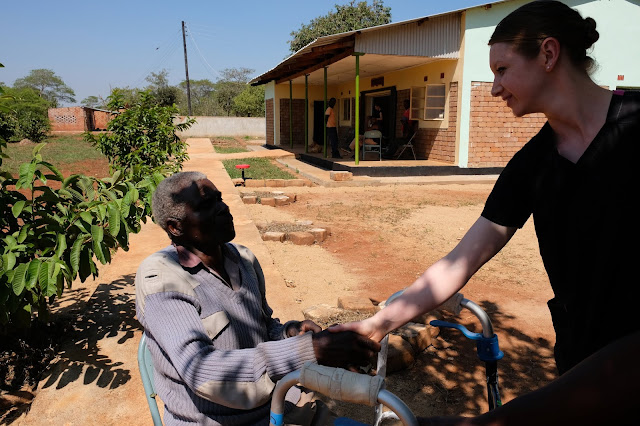 Daniel is a great example of the difference we see in the mindset and approach that patients have in Zambia compared to the people we are used to seeing in the U.S. Daniel's only way of moving around was for a family member to pick him up. His son brought him into the clinic carrying him on his back. Learning to walk with the prostheses and getting stronger is his only way of independence and not to be a physical burden on his family by having to pick him up. 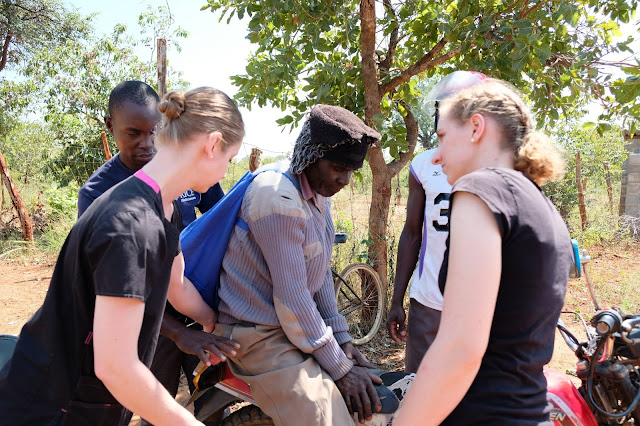 Getting him all set on the back of the motorbike before they left. 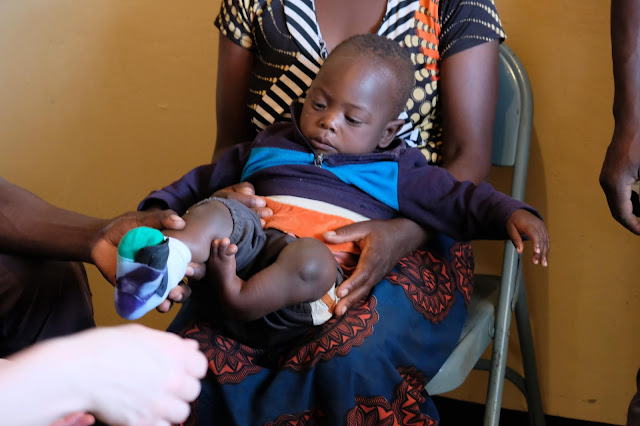 Chabelo came with his parents for fitting of his left bent knee prosthesis and fitting of a right side SMO (ankle brace). He has left side clubfoot and right side slight deformity that is flexible enough to fit him with an ankle brace to give him the stability he needs to stand and walk. Because of his left clubfoot, he's never walked before.

He was so cute! I supported him as Protashow moved his legs to walk. We instructed his parents on how to help him learn to walk using the bent knee prosthesis and right ankle brace. It will obviously take practice, but kids pick things up so quickly so I hope to see him walking around without help in September. 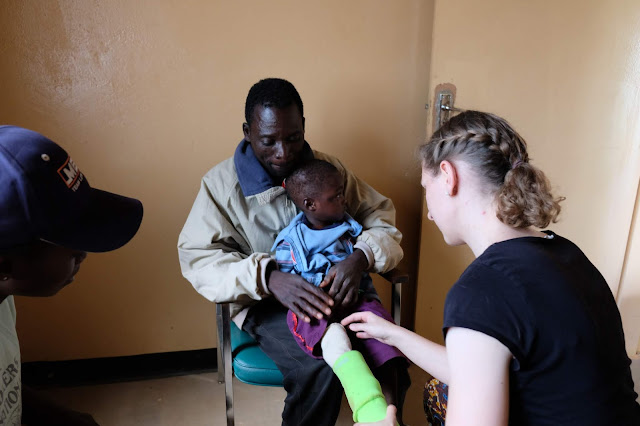 Best also came with his father for a check-up. We fit him with a right below knee prosthesis in April 2018 but did not see him for follow up in September. It was so good that they heard we were there and came for follow up! 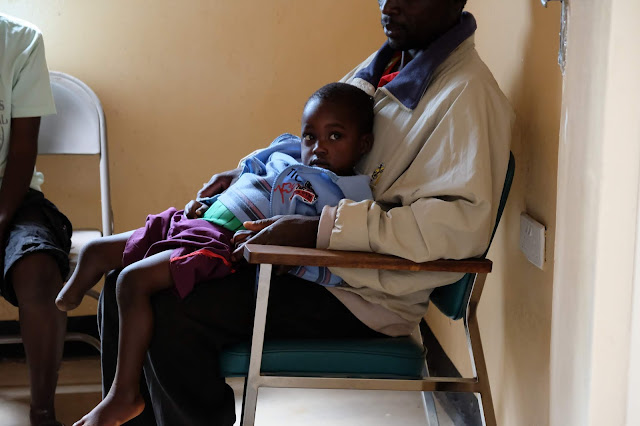 He had grown, so the prosthesis was modified to fit better with his larger leg size and lengthened since he's grown in height. 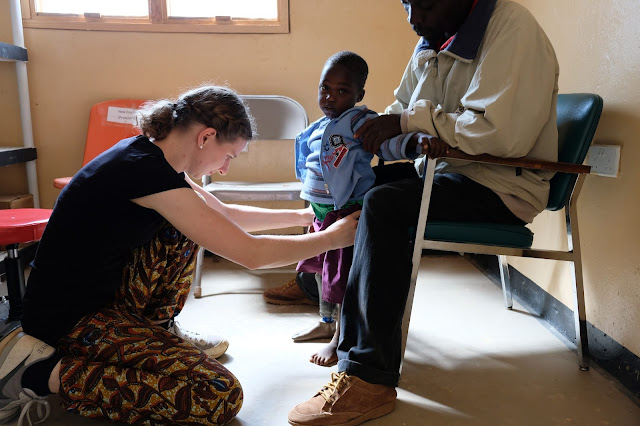 We definitely need to see him in September for a new prosthesis. Protashow got his father's phone number to contact them for September. 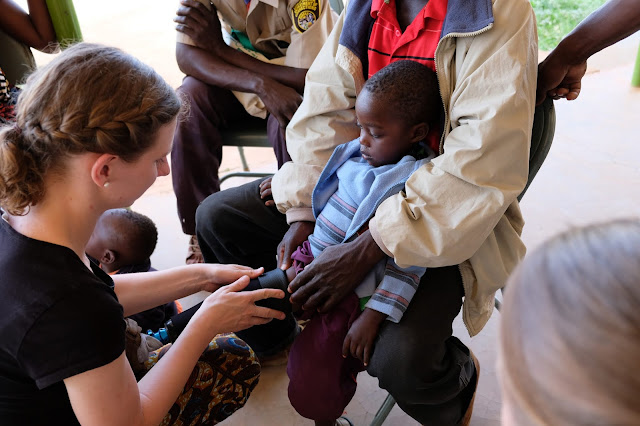 Also, another really cool thing about Best coming was that it was at the same time as Chabelo. Best had a clubfoot that was amputated as an infant. Chabelo would really benefit from an elective amputation of the clubfoot side to be more functional with a prosthesis. While he's small, the bent knee prosthesis will work. But as he grows, the bent knee concept will get more and more difficult. We had Best's father talk to Chabelo's parents about their experience with Best getting the amputation and to answer any questions they might have. Hopefully, them seeing Best and how functional he is with the below knee prosthesis will make them more willing to pursue an elective amputation for Chabelo.

Saturday evening we had a traditional meal of nshima (maize staple food), beans, cabbage and chicken. I was glad Whitney got to try nshima. After dinner we got all packed up, ready to leave on Sunday morning for Livingstone.